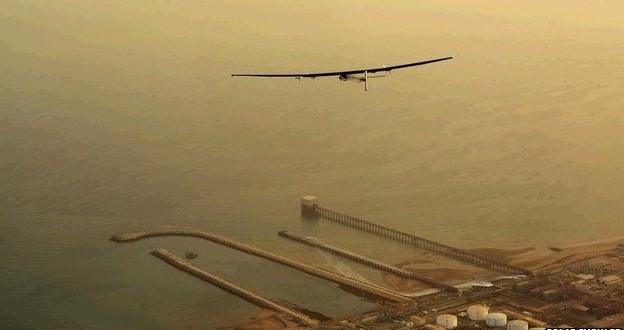 Solar Impulse heads out over the Arabian Sea

Solar Impulse is back in the air on the second leg of its historic attempt to fly around the world.

It is heading across the Arabian Sea to Ahmedabad in India.

Project chairman, Bertrand Piccard, is now at the controls, having taken over from Andre Borschberg, who flew the first leg on Monday from Abu Dhabi to Muscat.

The second leg will cover about 1,465km (791 nautical miles), and should take about 16 hours. Live coverage of Tuesday’s leg is being relayed on the internet.

It is expected to take five months in total for the single-seater Solar Impulse vehicle to cross the continents, passing over both the Pacific and Atlantic oceans in the process.

The Solar Impulse project has already set a number of world records for solar-powered flight, including making a high-profile transit of the US in 2013.

Piccard and Borschberg – they take it in turns to fly solo – will have to stay alert for nearly all of the time they are airborne.

Solar plane lands in Oman: ”An extraordinary sight, almost like a glider”

Andre Borschberg is a trained engineer and former air-force pilot, he has built a career as an entrepreneur in internet technologies.

Bertrand Piccard is well known for his ballooning exploits. Along with Brian Jones, he completed the first non-stop, circumnavigation of the world in 1999, using the Breitling Orbiter 3 balloon. The Piccard name has become synonymous with pushing boundaries.

It’s a deep-breath moment in the history of technology as Solar Impulse soars to the skies.

Because, pinch yourself, solar power is predicted to become the dominant source of electricity globally by 2050.

The price of solar electric panels fell 70% in recent years and costs are expected to halve again this decade.

And Deutsche Bank forecasts that, based on current fossil fuel prices, solar will produce power as cheaply as gas in two thirds of the world before 2020.

In the UK the solar industry thinks it can compete with wind within 18 months and with gas in the near future. In the US, solar jobs already outnumber coal jobs.

The solar revolution was sparked by government subsidies, which attracted venture capitalists to fund innovation and created a huge market that Chinese manufacturers are battling to exploit.

The solar boom is a huge help in the battle against climate change, but scientists warn it’s not nearly enough. And we must find ways of storing that mighty but capricious power, and making it work with the grid.

BBC iWonder: Is jet travel becoming the dirtiest way to cross the planet?