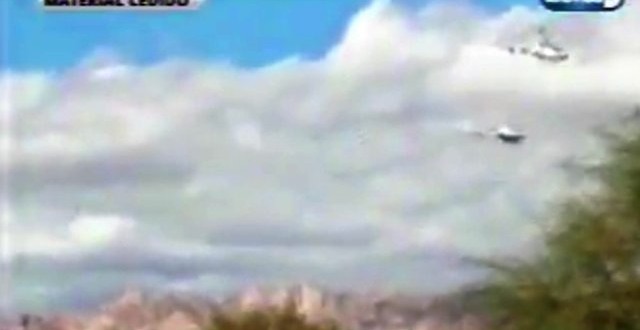 Footage caught the moment of the collision, reports Lucy Williamson

Three well-known French sports personalities were among those killed in the collision, which also claimed the lives of the two Argentine pilots.

French President Francois Hollande said it was “a cause of immense sadness”.

Both helicopters were involved in the filming of TV survival show Dropped, which airs on French channel TF1.

On the show, celebrities are flown into rough terrain and filmed while they attempt to find food and shelter.

Yachtswoman Florence Arthaud, Olympic swimmer Camille Muffat and Olympic boxer Alexis Vastine were the show’s celebrities on board at the time of the crash. They all died.

Other contestants were standing on the ground blindfolded a few hundred metres away when the accident happened, French media said.

The five other French nationals killed were said to have worked for Adventure Line Productions (ALP), the company making the programme. They were named as Laurent Sbasnik, Lucie Mei-Dalby, Volodia Guinard, Brice Guilbert and Edouard Gilles.

The Argentine pilots were named as Juan Carlos Castillo and Roberto Abate.

Local authorities said the bodies of five victims had been removed and taken to a morgue in the capital of Rioja province, about 300km (200 miles) from the crash site.

Camille Muffat, 25, won three medals, including gold in the 400m freestyle in the 2012 London Olympics. She retired from competitive swimming in 2014.

Alexis Vastine, 28, won bronze at the 2008 Beijing Olympics in the light-welterweight category. He was narrowly beaten in the quarter-finals of the 2012 Games.

Florence Arthaud, 57, was a hugely accomplished sailor, winning the 1990 Route du Rhum, the prestigious solo Atlantic race. A serious car accident put her in a coma when she was 17.

Profiles of Muffat, Vastine and Arthaud

The cause of the crash is as yet unclear and investigations are under way. The inquiry in France is standard procedure when its nationals die overseas.

President Hollande is sending two investigators and two aeronautical advisors to Argentina to assist in finding out what went wrong.

Tributes have poured in to the dead stars from France and beyond.

“We are shocked by this sad news,” said Thomas Bach, President of the International Olympic Committee.

“The world of sport and the Olympic family have lost three of their key members,” he said, calling them champions and role models.

British round-the-world yachtswoman Dame Ellen MacArthur told the BBC: “Florence’s view was that the sea is out there and it’s there for the taking.

“You know, I’m sure she’s inspired many, many people,” she added.

British swimmer Rebecca Adlington, who took bronze when Muffat won gold in the 400m freestyle at the London 2012 Olympics, said she was “terribly saddened”.

“She was very inspiring, a tough competitor, extremely talented and [a] friendly person.” Adlington wrote on her blog. “She was always so genuine and gracious.”

The accident happened in the remote, rugged province of La Rioja, close to the Andes mountains

Muffat’s boyfriend, William Forgues, said she was often called “Miss 100%” because “she won everything”.

“She went on this trip so happy. It was her choice to be there,” he told reporters.

“I saw her grow up a little as if she were my daughter. I’m thinking of her parents. Camille, we miss you.”

Filming for the TV programme began late last month at Ushuaia in the deep south of Argentina and had since moved to the mountainous western province of Rioja.

One cast member, figure skater Philippe Candeloro, was said to be “extremely shocked but unharmed”.

The three sports stars killed are shown here on the right-hand side of this image taken as they were leaving for Argentina. It was uploaded by French Olympian Philippe Candeloro (middle left)

France is waking up to the shock of its loss, with the death of the three sports stars and five other French nationals splashed across every paper, every news bulletin.

Meanwhile Culture Minister Fleur Pellerin told the BFM-TV news channel that the three athletes were “among the most outstanding ambassadors for our country”.

Former Arsenal and France striker Sylvain Wiltord, who was taking part in the current series, said via social media: “I’m trembling, I can’t talk. I’m horrified.” And a former team-mate of Camille Muffat, Yannick Agnel, said simply: “Not her… Let us be strong.”

But amid the horror there are also the first signs of anger. Well-known musician Benjamin Bioley has criticised what he called a “horrible TV reality show that serves up cardboard stars and then steals three wonderful athletes”.

As the country begins to absorb the news, the questions over this incident and the circumstances that led to it will only grow.

Officials have said the weather conditions in the mountainous area where the helicopters went down were good.

“An explosion occurred and it’s believed that they must have collided,” said La Rioja Secretary of Security Cesar Angulo. “Aeronautical experts will have to determine that,” he added.

“We learn with great sadness about the accident during the filming of the Dropped show,” said a statement issued by TF1.

“All TF1 teams come together in this terrible time with the pain of the families and relatives of the victims.”

TF1 says the show will be postponed and the rest of the crew is returning home.