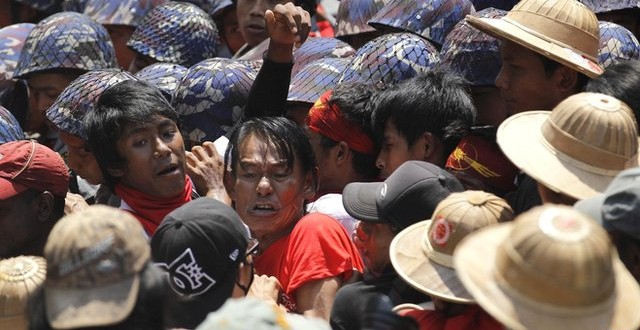 Hundreds of baton-wielding police in Myanmar have broken up a demonstration by students who say a new law stifles academic freedom.

A BBC Burmese reporter at the scene said dozens of protesters were injured. More than 100 people were arrested.

The BBC’s correspondent in Myanmar (also known as Burma) says the developments have shown a side to the police many hoped they would not see.

The scenes are a reminder of Myanmar’s authoritarian military past, from which it began to emerge four years ago under a nominally civilian government.

Tensions have been rising in Letpadan since last week, where police had blocked the students’ path with vehicles and barbed wire barricades.

There had been reports of negotiations between the two sides, and earlier on Tuesday a breakthrough agreement was announced, granting the students permission to continue on their journey to their final destination – Yangon (also known as Rangoon), Myanmar’s biggest city and former capital – in trucks provided by the government.

But the students were angered by the police’s refusal to allow them to hoist flags, sing songs or travel in convoy, our reporter says, and they then attempted to break through police lines.

The police hit out with batons

The students were trying to break through police lines

Many were reported to have sustained injuries

Reporters were chased away by police

Several of the protesters were detained

Some 200 students attempted to push through several hundred police officers and several fainted or cut themselves on the barbed wire barricades, the Irrawaddy news website said.

Several were dragged into trucks, Associated Press news agency reported. Some were chased into a Buddhist monastery where they have been taking refuge, according to Reuters.

“Many have been beaten and some have been arrested, including many female students,” one student protester, Honey Oo, told AP.

The Ministry of Information said 127 people had been detained.

The students say they want changes to be made to a new bill which they say centralises control over higher education.

They are calling for more power to be devolved to universities and higher education institutions, the right to form student unions, and teaching in ethnic minority languages.

But the BBC’s Jonah Fisher in Yangon says the protest march, which began in Mandalay in January, has come to have a greater significance and observers are watching to see whether it becomes a rallying point for those equally unhappy about the lack of progress in reforms and constitutional change.

Young Burmese have been at the forefront of several protests in Myanmar over the years, including a notorious 1988 uprising against the former ruling junta.

Five students were reportedly detained in Letpadan on Friday but have since been released, and eight were detained and later freed in Yangon.

A smaller solidarity protest was also held in Yangon on Tuesday and that, too, was broken up by police.

The government has agreed to rethink the new education law following several rounds of talks with student representatives, and a parliamentary committee is currently debating proposed changes.

But the students pulled out of the discussions last week in response to the police blockade at Letpadan.