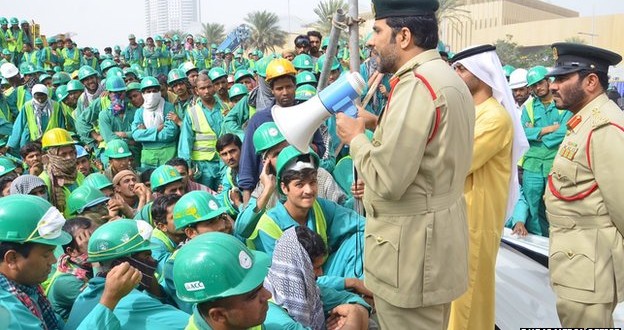 Hundreds of migrant workers from South Asia have staged a rare protest in Dubai over a pay dispute with a construction firm employing them.

Photos posted on social media showed the workers blocking one of the busiest roads in the city on Tuesday morning.

Public protests are prohibited in the United Arab Emirates, and riot police were deployed.

The protest ended without any violence or arrests, and Dubai’s government says the dispute has now been resolved.

Hundreds of thousands of foreigners are employed in the construction industry. Many face exploitation and have little recourse to basic rights.

The workers are helping to build the Fountain Views development, a project on a 500-acre (202-hectare) site in central Dubai.

They said their company had stopped overtime work and pay, at a time when basic salaries were too low.

Mohammed, a Pakistani construction worker who was at the protest, told the Reuters news agency that a worker’s basic monthly salary was less than 500 dirhams (£90; $136).

With overtime, he said, that could more than double – to 1,100 dirhams.

“We don’t have overtime work any more so we’re striking,” he said. “I’m not afraid to ask for my rights.”

The protest took place next to the Dubai Mall, the world’s largest mall

In an interview with the Abu Dhabi-based newspaper The National, Brigadier Mohamad al Mur, the director general of Dubai Police’s Department of Human Rights, said workers were being paid, but had recently lost incentives.

He said: “The workers used to be given monetary incentives to encourage them to work, something the company stopped doing because it had become too costly for them and profits were not the same as before.

“The workers depended on these incentives and believed they have a right to get them.”

Workers stayed at the protest site while talks went on between police, the construction company and negotiators.

The workers cheered and applauded when they were told that the dispute had been settled and as police began leaving the area.

In a tweet, the Dubai government’s media office said the dispute had been resolved within an hour.

Emaar Properties, the developer of the Fountain Views project, said a contractor employing the workers had been given “clear guidelines” to ensure industry best practices were followed.

“Emaar is taking this matter seriously and have highlighted the incident to the senior management of the contractors to ensure that matters are resolved”, it said in a statement sent to the Associated Press.

The last available statistics released by Dubai police showed there were 30 labour-related protests in the emirate in the nine months leading up to October 2013. However, protests of the scale seen on Sheikh Mohammed bin Rashid Boulevard are rare.