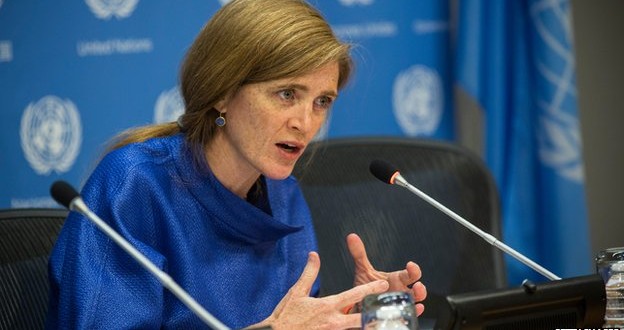 US ‘concern’ over Europe defence cuts

A senior US diplomat has warned of a “dangerous” gulf emerging between US and European defence spending.

Samantha Power, the US ambassador to the United Nations, has appealed to European governments to spend more.

She told BBC Radio 4’s Today programme that cuts to defence budgets in Europe were “concerning”.

Prime Minister David Cameron said the UK already met the Nato defence spending target and was also “due to meet it in the coming years”.

Ms Power said that in “most cases” defence spending in Europe was shrinking, despite a growth in defence threats.

The ambassador said she had flown to Brussels to encourage the leaders of Nato countries to meet the defence spending target of 2% of GDP.

She warned: “The number of missions that require advanced militaries to contribute around the world is growing not shrinking.”

The UK government has committed to the 2% spending target until the end of this Parliament, but there has been no commitment beyond that from either the Conservatives or Labour.

Britain is one of the few countries to meet the target, Ms Power said.

She added: “The United Kingdom is exceptional – has been a staunch Nato ally and has stepped up – whether on Isil (Islamic State) or on Ebola or in Afghanistan”.

But the ambassador warned: “We’re looking at an awful lot of threats and many of those threats are migrating into Europe, at least in the form of Isil, and yet we haven’t seen European defence spending reach the 2% of GDP level that European leaders committed to.”

On Monday the Royal United Services Institute (Rusi) said it was inevitable that the UK’s defence spending would drop below the 2% target.

The defence think tank warned that up to 30,000 more military personnel could lose their jobs by 2020, whatever the outcome of the general election.

The warning followed concerns from the head of the US Army over the impact of spending cuts on the UK’s armed forces.

Chief of Staff General Raymond Odierno voiced his reservations about the falling proportion of the UK’s national wealth being spent on the military.

Despite these concerns, Ms Power told the Today programme: “This is not about one country, but it is about a larger, collective challenge that we are now facing.”

She said a small investment into UN peacekeeping could make a “tremendous difference”.

The ambassador appealed to governments for aid in the form of military sophistication, niche capabilities, attack helicopters and intelligence.

“Those kind of capabilities could strengthen the missions as a whole and thereby diminish the threat that all of us face,” she added.

The prime minister has come under increasing pressure from Conservative MPs to commit the government to meeting Nato’s target, and a backbench bill on Thursday will attempt to enshrine this target in law.

He denied the UK was “shrinking its role in the world”, telling LBC radio: “What we have done with the defence budget is we froze it in cash terms at around £36bn – that’s the fifth biggest defence budget in the world and the second biggest in Nato.

“We have made very specific pledges to increase in real terms the equipment budget, which is absolutely vital – that’s the aircraft carriers and the Type 26 frigates and the destroyers and hunter-killer submarines and the rest.”