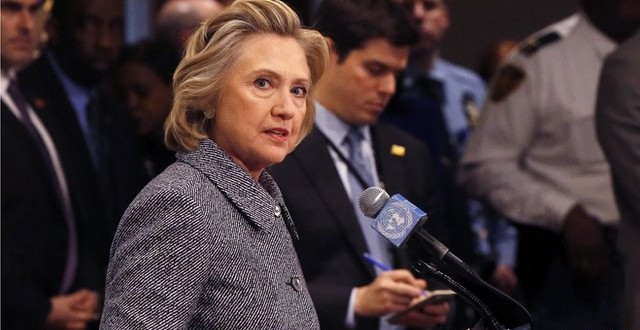 Clinton email was for ‘convenience’

Hillary Clinton: “I thought using one device would be simpler; obviously it hasn’t worked out that way”

Hillary Clinton has told reporters she used private emails out of “convenience” during her time as secretary of state.

But Mrs Clinton said it “would have been better” to have two accounts to separate work and personal emails.

The issue of whether Mrs Clinton breached federal records rules has gained attention as she is expected to announce a run for president.

She is seen as a top contender for the 2016 Democratic nomination.

Mrs Clinton had planned to spend March talking about women’s issues – including at a UN speech on Tuesday – before announcing her candidacy in early April, the Associated Press news agency reported.

But she decided to answer questions on Tuesday amid criticism from Republicans and worries from Democratic allies that she was not explaining herself.

At a news conference after Mrs Clinton made a speech at a UN session on empowering women, she told reporters why she set up a private email system during her time as secretary of state.

“I thought using one device would be simpler; obviously, it hasn’t worked out that way,” she said.

Under US federal law, officials’ correspondence is considered to be US government property.

Mrs Clinton said she and her lawyers made the decision over what would be considered personal email when the state department asked for records from former secretaries of state.

The emails deemed personal were about half of the 60,000 emails in total she sent during her time in office.

The state department said it would release the emails they received, about 55,000 printed pages in total, after a review.

Mrs Clinton said no classified material was sent from the private account and said her use of personal email was permitted by the state department.

“I fully complied with every rule,” she said.

But she said she had discarded thousands of personal emails, including ones about planning her daughter’s wedding and her mother’s funeral.

She added the “vast majority” of her emails to state department officials were already automatically recorded because they were in correspondence with official government accounts.

And she said she did not send classified material from her personal email address.

Mrs Clinton’s email address was run from a private server set up for her husband, former President Bill Clinton, in their family home in New York – which is guarded by the Secret Service.

She told reporters the contents of the server would remain private.

Representative Trey Gowdy, the Republican leading a committee investigating the deaths of four Americans at a state department facility in Benghazi, Libya, said Mrs Clinton’s comments left him with more questions than answers.

Clinton’s visit to the UN was supposed to be all about empowering women, 20 years after the former first lady’s speech in Beijing about women’s rights. No one other than those really passionate about gender equality will remember a word she said on that subject on Tuesday.

That’s why it so odd that for someone so devoted to the issue, she chose to make her first comments on the email controversy, in essence her first new conference, at the UN.

There was much criticism of her choice of location, with reporters complaining she was doing everything to make the news conference inaccessible.

In the end, the scrum of journalists was a sight unseen at the UN in years, not since the days preceding the Iraq war, according to UN officials.

While politics often come up during UN news conferences, as foreign ministers or presidents address questions with a home audience in mind, that stage has never been given to someone with no official role representing a country.

The request to use the stake out was made through the US mission at the UN which suggests the Obama administration was keen to lend a helping hand. After all, Obama too exchanged emails with Clinton.

“There remain serious questions about the security of the system she employed from a national security standpoint,” Mr Gowdy said.

His committee will be the first to receive the emails after a state department review.

Jen Psaki said on Tuesday that once the review was complete, the emails would be posted online for the public to see.

Passages revealing anything from trade secrets to sensitive national security information could be redacted, in keeping with open records law guidelines.