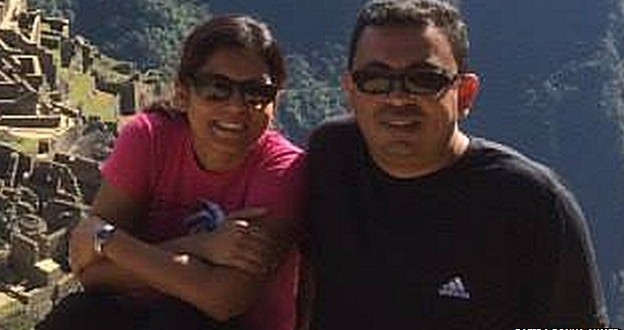 The widow of a blogger who was hacked to death in Bangladesh says she will continue to speak out on the causes of secularism and science.

Speaking to the BBC from a safe location, she said fundamentalism had “taken deep roots” in Bangladesh.

She said she was recovering slowly and had few memories of the attack.

He had defended atheism in a Facebook post, calling it a “rational concept to oppose any unscientific and irrational belief”.

Police say they suspect he was killed by religious extremists.

A group of men wielding meat cleavers ambushed the couple after they left Dhaka University on 26 February.

“Somehow, my memory is completely blocked about the incident itself,” Ms Ahmed told BBC’s Newshour.

“We were supposed to be going back home to have dinner with the family. I think I was holding his hand and we were just talking. I do not remember anything from that point until I was in some sort of vehicle and someone was carrying me. I remember I was soaked in blood.”

Ms Ahmed said she realised they had been attacked when she was in hospital and she noticed stab wounds to her head. She also had serious wounds to her hands and had lost a thumb.

Supporters of Avijit Roy staged protests after he was killed

“Avijit was still alive, lying on a stretcher beside me. Doctors were going back and forth and I was telling them ‘please take care of him first, because my condition is better’. Avijit was just making a sound, but he was not conscious,” she said.

She described her husband as “an intellectually fulfilled atheist, who dedicated his life to promoting science and secularism”.

“I will go back to being vocal and expressing what we believe in. The cause that Avijit died for, I will not be quiet,” she said.

The couple lived in the US and were visiting Dhaka only to attend the book festival.

After the attack, students, teachers and bloggers gathered at Dhaka University to protest against the killing.

Police told the BBC at the time that they were investigating a local hard-line religious group that had praised the killing in an online message.