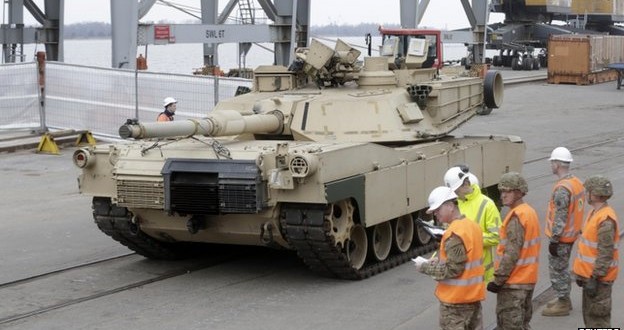 US tanks in Baltics as drills start

US tanks and fighting vehicles started arriving in Riga on Monday

Hundreds of US military vehicles have arrived in the Baltic states and are to stay in Europe, in a mission to reassure Nato allies unsettled by Russia’s actions in Ukraine.

The shipment coincides with the deployment of a US infantry division and Nato navy drills in the Black Sea.

Although a ceasefire is in place in Ukraine, the conflict has heightened distrust between Russia and the West.

Russia said on Tuesday it was pulling out of a European arms control pact.

The Conventional Armed Forces in Europe (CFE) treaty, signed in 1990 as the Cold War was coming to an end, was originally aimed at limiting the numbers of tanks, combat aircraft and heavy artillery between the Atlantic Ocean and the Ural mountains in Russia.

Russia had already suspended involvement in 2007, and the foreign ministry in Moscow said the practical work of the treaty’s consultative group in Vienna had been almost entirely wound down.

But the announcement came within hours of Russian Foreign Minister Sergei Lavrov launching an attack on the European Union.

The Russian foreign minister singled out Donald Tusk, head of the European Council, for criticism

“EU bureaucrats in Brussels are intentionally escalating confrontation between Russia and the EU,” he said, complaining that they were trying to postpone the political terms of the ceasefire in eastern Ukraine.

He also singled out European Council President Donald Tusk, accusing him of apologising to US President Barack Obama for the EU not acting as swiftly against Russia as the US.

The former Polish prime minister said in Washington that if the EU and US were united they would be able to “put a stop to the aggressive policy of Russia against her neighbours”.

Meanwhile, Ukrainian President Petro Poroshenko said on Monday night that government forces had withdrawn most of their rocket and heavy artillery systems, while pro-Russian rebels had also “withdrawn a significant amount”.

However, there is widespread concern among the governments of the Baltic states at Russia’s involvement in eastern Ukraine.

The Kremlin says its forces have not been directly involved in combat, but its denials have been rejected by Ukraine, the West and independent experts.

Lithuania is bringing back conscription and President Dalia Grybauskaite told the BBC last week that the threats to her country’s security were “very real”. She spoke of increased Russian military activity in the Baltic Sea and across the border in the Russian enclave of Kaliningrad.

Russian soldiers also took part in drills in the Pskov region that borders Estonia and Latvia last month. And last September an Estonian security service official was seized by Russian agents and taken to Moscow.

A US military official told the BBC that some 250 heavy vehicles, out of a total of 750 vehicles, were arriving in the Latvian capital, Riga, and in northern Germany, and would be “pre-positioned for deployment so we can more quickly react to crises”.

The hardware would be based in the Baltics and Poland for the 90-day Nato training exercise, but would then be spread throughout Europe in “controlled storage”.

Arrangements still had to be made with host nations, he said.

A Nato naval exercise was also under way in the Black Sea on Tuesday, involving seven members of the Western alliance including Bulgaria, Romania and Turkey.

Russia’s annexation of the Crimean peninsula from Ukraine a year ago has alarmed Nato. Last week Russia began military exercises in several southern areas, including Crimea and the pro-Russian breakaway Georgian region of Abkhazia.