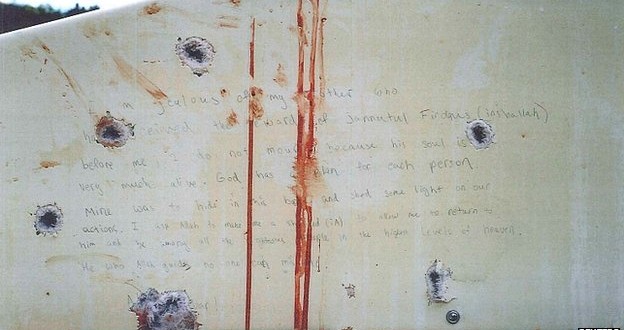 The message reads: “God has a plan for each person. Mine was to hide in this boat”

The jury in the trial of a man accused of the Boston Marathon bombings has been shown a blood-stained message he allegedly wrote on the inside of a boat he was hiding in before his capture.

The message accuses the US government of “killing our innocent civilians”.

Dzhokhar Tsarnaev, 21, is charged with 30 counts related to the bombings, which killed three people and wounded more than 260 in April 2013.

He could face the death penalty if found guilty.

Jurors in the US District Court in Boston were shown a photograph of the pencil-written message displayed on a screen.

There were bullet holes through the side of the boat, obliterating some of the words, and lines of blood running through the message.

Mr Tsarnaev was found hiding in a boat in the backyard of a house just outside Boston after a huge police manhunt days after the bombings. He was seriously wounded and taken to hospital.

His elder brother Tamerlan Tsarnaev – who was also sought for the bombings – had been fatally wounded hours earlier in a gun battle with police.

The message reads: “I do not mourn because his soul is very much alive. God has a plan for each person. Mine was to hide in this boat and shed some light on our actions.”

It adds: “US Government is killing our innocent civilians. I don’t like killing innocent people it is forbidden in Islam but due to said [word lost by bullet hole] it is allowed.”

Earlier in the trial, the defence made the surprise admission that Mr Tsarnaev had participated in the attacks.

But defence lawyers argue that his 26-year-old brother, Tamerlan, had been the driving force behind the attacks.

The prosecution says Dzhokhar Tsarnaev, who emigrated with his family from Chechnya, had extremist views and wanted to hit back at the US in revenge for military action in Muslim countries.

The trial is expected to last three to four months.