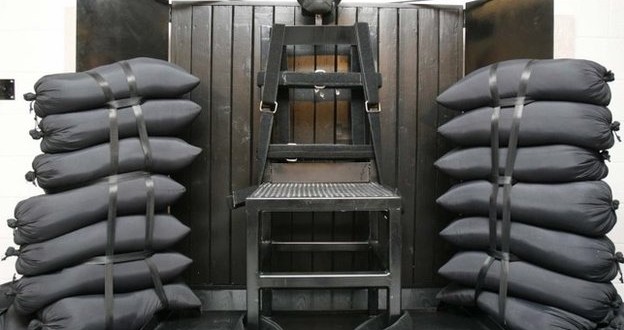 A file photo from 2010 shows the firing squad execution chamber at the Utah State Prison in Draper, Utah

Lawmakers in Utah have proposed resuming the use of firing squads to carry out the death penalty if lethal injections drugs are not available.

US states such as Texas are struggling to obtain lethal injection drugs amid a nationwide shortage.

It is not clear if Utah Governor Gary Herbert will sign the measure into law.

The bill that passed the state senate on Tuesday night would reinstate the use of firing squads more than a decade after the state abandoned the practice.

The bill’s sponsor, Republican lawmaker Paul Ray, said using a firing squad would be faster and more humane than the drawn-out deaths that have occurred in botched lethal injections.

But opponents call firing squads a cruel practice from the state’s Wild West days. If approved, Utah would become the only US states to execute inmates by firing squad.

States across the country have seen their drug inventories dwindle after European manufacturers opposed to capital punishment have refused to sell the lethal concoctions.

Texas only has enough drugs on hand to perform two more executions. The state could run out in the next two weeks.

The head of Utah’s prison system has said the state does not have any lethal injection drugs on hand.

The Utah bill is one of many being debated across the country.

Because of the intense media attention, Utah lawmakers stopped offering inmates the choice of a death by firing squad several years ago.

But a handful of inmates sentenced to death before 2004 still have the option of going before a firing squad.

Ronnie Lee Gardner, a convicted murderer who shot and killed a lawyer in attempt to escape from prison, was the last inmate executed by a firing squad in 2010.