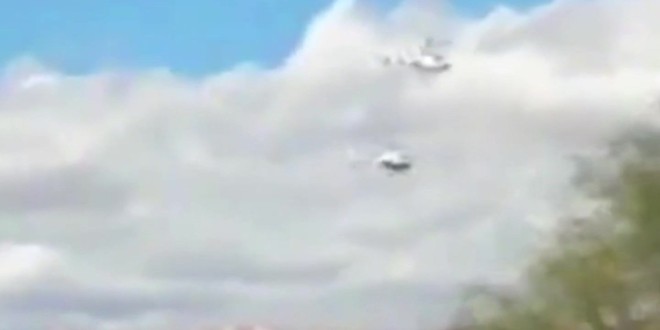 Footage caught the moment of the collision, as the BBC’s Lucy Williamson reports

The officials are to be joined by French experts at the site of the crash near Villa Castelli, La Rioja province.

Three well-known French sports personalities were among the victims of the collision during the filming of TV survival show Dropped.

French President Francois Hollande said it was “a cause of immense sadness”.

The cause of the crash is as yet unclear. Video of the accident shows the helicopters flying close to each other in clear conditions, before one appears to fly into the other.

Camille Muffat, 25, won three medals, including gold in the 400m freestyle in the 2012 London Olympics. She retired from competitive swimming in 2014.

Alexis Vastine, 28, won bronze at the 2008 Beijing Olympics in the light-welterweight category. He was narrowly beaten in the quarter-finals of the 2012 Games.

Florence Arthaud, 57, was a hugely accomplished sailor, winning the 1990 Route du Rhum, the prestigious solo Atlantic race. A serious car accident put her in a coma when she was 17.

Profiles of Muffat, Vastine and Arthaud

President Hollande is also sending two investigators and two aeronautical advisors to Argentina to assist in finding out what went wrong.

French Consul General Raphael Trannoy is now in the regional capital of La Rioja, about 300km (200 miles) from the site, to help co-ordinate the investigation.

The small Argentine provincial town of la Rioja is a long way from anywhere. Nestled at the foot of the Andes, you can see why the producers of a TV show all about survival and the rugged outdoors would want to use this region as a backdrop.

But on Tuesday, as the French consul general and handful of television teams flew in to the town’s rudimentary airstrip, they came not to admire the scenery but to find out why two relatively new helicopters, flying in almost perfect weather conditions, collided in mid-air with such devastating consequences.

As a crowd of locals, children and adults alike, looked on through the wire, ambulances brought the bodies of the eight French nationals and the two Argentine helicopter pilots to the mortuary.

Outside, the partner of one of the pilots spoke to me as she waited patiently to be allowed in to see his body.

“He was a really experienced pilot, he’d spent years in the military and had worked with these [French] producers before,” said Azucena del Valle Aguero of pilot Juan Carlos Castillo.

As darkness fell the mortuary gates opened to allow in a small convoy bringing the regional governor and French Consul General Raphael Trannoy.

France’s yachtswoman Florence Arthaud, Olympic swimmer Camille Muffat and Olympic boxer Alexis Vastine were the show’s celebrities on board at the time of the crash.

Reports in Argentina said French swimmer Alain Bernard, who was also taking part in the filming, narrowly escaped the crash after getting off one of the helicopters at the last minute to avoid overloading it.

On the show, which airs on French channel TF1, participants are flown into rough terrain and filmed while they attempt to find food and shelter.

The five other French nationals killed were said to have worked for Adventure Line Productions (ALP), the company making the programme. They were named as Laurent Sbasnik, Lucie Mei-Dalby, Volodia Guinard, Brice Guilbert and Edouard Gilles.

The two Argentine pilots have been identified as Juan Carlos Castillo and Roberto Abate.

In France, prosecutors have opened a manslaughter investigation – a standard procedure when its nationals die overseas.

Tributes have poured in to the dead stars from France and beyond.

“We are shocked by this sad news,” said Thomas Bach, President of the International Olympic Committee.

“The world of sport and the Olympic family have lost three of their key members,” he said, calling them champions and role models.

British round-the-world yachtswoman Dame Ellen MacArthur told the BBC: “Florence’s view was that the sea is out there and it’s there for the taking.

“You know, I’m sure she’s inspired many, many people,” she added.

British swimmer Rebecca Adlington, who took bronze when Muffat won gold in the 400m freestyle at the London 2012 Olympics, said she was “terribly saddened”.

“She was very inspiring, a tough competitor, extremely talented and [a] friendly person.” Adlington wrote on her blog. “She was always so genuine and gracious.”

The accident happened in the remote, rugged province of La Rioja, close to the Andes mountains

Muffat’s boyfriend, William Forgues, said she was often called “Miss 100%” because “she won everything”.

“She went on this trip so happy. It was her choice to be there,” he told reporters.