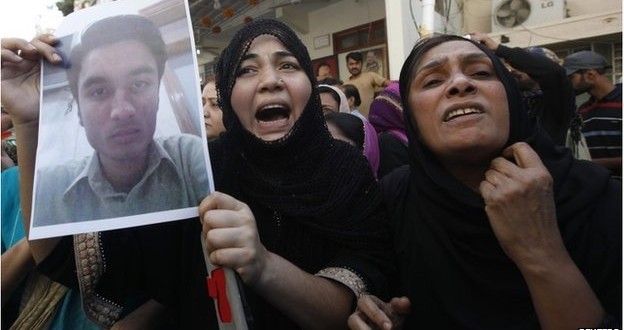 Supporters protested after a number of party workers were detained

A number of party workers suspected of murder were detained, he said, and illegal weapons were recovered.

The MQM has long been accused of using violence and intimidation to control Karachi – claims it denies.

The party’s leader Altaf Hussain, who lives in self-imposed exile in London, is being investigated in the UK over money laundering allegations.

After Wednesday’s early morning raid, supporters and activists gathered outside the MQM headquarters and party leaders called for a nationwide strike.

“MQM has itself always maintained its policy of zero tolerance against crime and terrorism, and it has always offered to co-operate,” he said.

Party workers were rounded up by the Pakistan Rangers

A party worker was shot dead during the raid, though it is unclear who fired the shot

The MQM says a number of its leaders, including senior leader Amir Khan, have been detained.

But Col Tahir told local media Mr Khan had not been arrested, but was being held for questioning to explain “the presence of criminal elements”.

Col Tahir said a large cache of weapons had been recovered, including illegal weapons that “cannot even be imported into Pakistan”.

“We suspect that these weapons may be those from missing Nato containers,” he said.