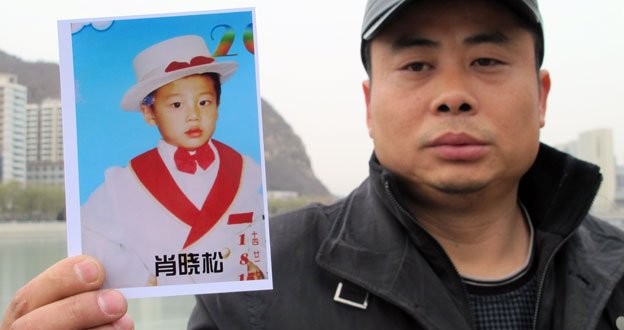 The father searching for his abducted son

An illegal market in children has developed in China, in which babies are being openly sold online. Police say many of the victims are from the estimated 20,000 children abducted each year – a crime with a devastating impact on separated children and parents.

It was a few days before the Chinese New Year in February 2007 and Xiao Chaohua was working at his small clothes shop in an industrial zone of Huizhou, a city in China’s Pearl River delta, not far from Hong Kong.

Xiao’s five-year-old son, Xiaosong, was in a playful mood. A couple of hours earlier, they had visited a nearby beach where they had made sandcastles and paddled in the surf. “He was so happy that day,” says his father. “I took lots of pictures of him on my phone.”

On the motorbike ride back home, Xiaosong fell asleep and lost one of his shoes. When his mother found out she scolded them for being careless. But the shop was full of workers from nearby factories buying new clothes for the holiday and there was no time to argue.

At about seven in the evening, as dusk was falling, Xiaosong asked his father for some money to buy his favourite snack – the sweet milk from a grocery shop just around the corner. His 10-year-old sister, Xiao Lu, would accompany him. Xiao thought nothing of it and gave Xiaosong some small change.

It was the last time he saw his son.

Xiao realised something was wrong when his daughter returned alone. The two children had split up after Lu had gone to speak to a friend.

He immediately began searching. At first he checked the grocery store, then the internet cafe, but found nothing. He called the police and an officer arrived.

Xiao says the policeman said there was no point in looking as his son had probably been snatched and already taken to another city. But Xiao was undeterred. A few hours later, he found a migrant worker who he had previously seen playing with Xiaosong at a games arcade. The man was taken to the police station for questioning but was released as there was no evidence against him. He then vanished.

During the first week, Xiao paid for a missing person advertisement on local TV. It cost him 50,000 rmb (£5,200, $8,000). There was no response. So he kept on searching. Days became weeks, weeks became months, and months turned into years. “I had no plans,” he says. “I just went crazy. I just went wherever I could find people, wherever I could find crowds.”

For the first year, he rode his motorbike across Guangdong province – China’s manufacturing heartlands. He would put up missing posters in bus stations, train stations and shopping malls, offering a reward for any information.

Eventually he sold his shop and with the proceeds bought a van. His wife got a job at a shoe factory and their daughter was sent back to their home town in Jiangxi province to be looked after by her grandparents.

And then Xiao began an extraordinary journey across China. He travelled from the edges of the Tibetan plateau to the country’s mega-cities, to small villages down dusty roads. His journey has taken him to places he could never have imagined.

Xiao Chaohua’s talks about the search for his son

Thousands of Chinese parents experience Xiao’s agony every year. The Chinese government provides no figures, but the US State Department has estimated that 20,000 children are abducted annually, or 400 a week.

Chinese state media have suggested the true figure could even be 200,000 per year, though the police reject this higher estimate.

A baby boy can sell for up to 100,000 rmb (£10,500, $16,000), it’s reported, double the price for a girl. There is a traditional preference for boys in Chinese culture as they carry on the family name and provide financial support for elderly parents.

Once abducted, children are most often sold for adoption but some are forced to work as beggars for criminal gangs. The vast majority of those abducted are simply lost forever.

A medic carries a rescued baby in Sichuan, south-west China, 2012

A nurse looks after a rescued baby in a hospital, Sichuan, 2012

Child trafficking first received wide publicity in China 12 years ago, when police in Guangxi province discovered 28 babies in the back of a bus. They had been drugged to keep them quiet and then stuffed inside nylon bags, where one died from suffocation. The traffickers were caught and the leaders sentenced to death.

But just as the authorities have stepped up the fight, in recent years, child traffickers have become more sophisticated. A lot of activity now takes place online.

According to the state-run news agency, Xinhua, four criminal gangs smashed by police in February last year were offering “unofficial adoption” as a front to sell stolen babies via websites and online chat forums. The operation led to 1,094 arrests and the rescue of 382 babies.

There are still troubling signs of a market in children on the internet today.

I contacted the seller via instant messenger. She told us she was a single mother with three daughters – a three-year-old and eight-month-old baby twins.

She could not afford to raise the three children alone, she said, and that was why she was selling one of the twins.

“Although it breaks my heart, I want her to lead a better life,” she wrote on instant messenger.

She then sent me a picture. The twins were sitting on a bed, dressed in light blue baby clothes. They were smiling, had full heads of hair and looked well cared for. The one in the foreground was for sale.

To prove it was not a scam, I asked the seller for a video call. She agreed.

In a dark room she held the baby up to the camera. The baby – too young to know it had been put on sale – let out a small cry. For a moment, we saw half of the trafficker’s face.

The call where a baby is offered for sale

I then ended the conversation and told the authorities what had happened – but there has been no response.

It’s impossible to know whether the woman was selling her own child, as she claimed, or whether she was a trafficker.

It appears to be quite common for parents to sell children immediately after they have been born.

The BBC secretly filmed undercover at a hospital – where a doctor said abandoned babies were frequently sold into adoption.

“There are too many babies born outside of the family planning laws,” she said. “As long the families make a deal and it’s done right after birth – nobody needs to know.”

Under the country’s strict family planning rules many families are limited to one child, and will face stiff fines if they have more.

There are also families that have a daughter but would prefer a son.

Children who have been sold by their parents can nurse a lifelong sense of rejection.

Zhang Qingqing, a 23-year-old migrant worker, told me she was desperate to meet her birth parents, if only to ask them why they had got rid of her, selling her for the equivalent of $100.

For years she hated her adoptive parents, she says. Only recently has she begun to experience any sympathy for her adoptive father, a working man who married twice only for both wives to die.

A couple of months ago, almost eight years after his son disappeared, Xiao arrived in the city of Chengde, famous for its Buddhist temples. A four-hour drive from Beijing, it once served as a summer retreat for China’s emperors – a place for them to escape the capital’s stifling heat.

Xiao parked his van in the grounds of a local high school. The vehicle was plastered with dozens of pictures of abducted children, including one of Xiaosong in a blue and yellow polo shirt.

“He is a very cute and obedient boy,” Xiao says. “He was not like other children who always cry and are naughty. When he asked for money to buy snacks, I would joke with him, ‘So when will you return the money?’ And he would say, ‘When I grow up I will give the money back. I’ll buy you a good car – a BMW or a Mercedes.'”

Xiao, now 39, is polite and courteous. But there is a distance when you talk to him. His eyes are lifeless – a sign of the burden he is carrying.

He is in Chengde to give a talk about child-trafficking to a group of 40 or so students. While he is waiting, hundreds file out of the building for a morning run in the freezing cold – Xiao cannot help thinking about his son who would now be a similar age.

I dream about finding him and we’re both happy”

He later tells his audience he has looked along the rows, to see if his son is sitting among them. He shows them a video about trafficking, and sings a song. “Baby where are you?” he sings. “I lost you that day… I will spend my whole life trying to find you.” One of the women in the audience begins to cry.

It’s had one major success. A two-year-old boy abducted for adoption was rejected by the buyers once they found out he had asthma. The trafficker then dumped the child on a bus and he was taken to an orphanage. He was discovered when a worker at the orphanage recognised him in one of the Fund’s photographs, which led to him being reunited with his mother.

Currently they can face up to three years in prison – but experts say that in reality most buyers are never charged.

Until the law is changed, Xiao believes the black market in children will continue to thrive.

He has already travelled tens of thousands of kilometres, but says his journey will only end when he dies or he finds his son.

“I used to have nightmares when Xiaosong said, ‘Daddy you don’t want to find me.’ I’d wake up covered in sweat,” he says.

“But now I dream about finding him and we’re both happy.”

Subscribe to the BBC News Magazine’s email newsletter to get articles sent to your inbox.