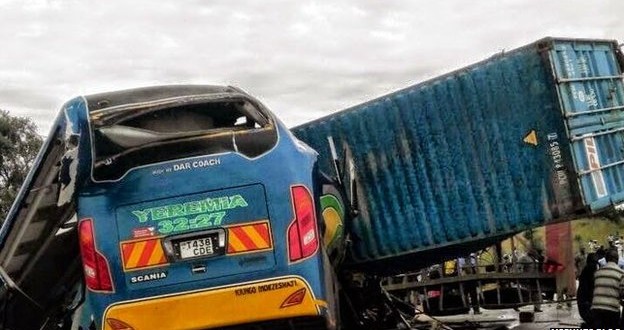 The injured have been transferred to hospital

The accident happened after a lorry driver swerved to avoid a pothole, the regional commander told the BBC.

One of the lorries’ containers fell on to the bus that had been heading to Dar es Salaam, crushing many passengers to death, he said.

Traffic accidents are common in Tanzania, where the state of the roads and the vehicles is often poor.

The crash happened next to this pot hole

Iringa regional police commander Ramadhan Mungi said a further 23 passengers had been seriously injured and had been taken to Mafinga hospital.

All the bodies trapped between the lorries had been removed, he said.

The bus had been travelling from the south-western town of Mbeya to the commercial capital.