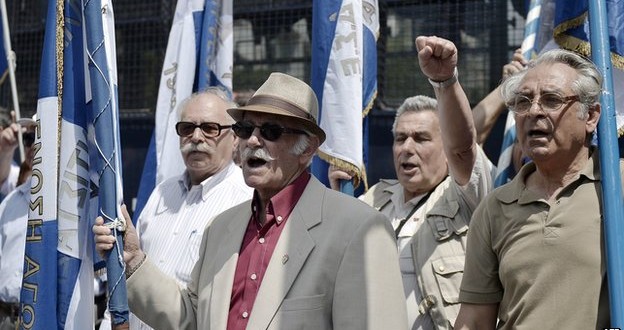 The Greek government has threatened to seize German property as compensation for a Nazi atrocity in World War Two.

Justice Minister Nikos Paraskevopoulos said he was ready to approve a Supreme Court ruling from 2000 backing payment to relatives of the 218 victims.

The debt-ridden government is already calling for Germany to pay billions of euros in wartime reparations.

But Germany insists the issue of compensation was settled in 1990, before the country was reunified.

Chancellor Angela Merkel’s spokesman Steffen Seibert said on Wednesday it was Germany’s firm belief that the question had been resolved legally and politically.

“We should concentrate on current issues and, hopefully what will be a good future,” he said, referring to Greece’s financial crisis and the Athens government’s proposals for a renegotiation of its bailout package from the EU and International Monetary Fund.

Greek Prime Minister Alexis Tsipras told parliament late on Tuesday that he had a duty to pursue reparations dating back to the Nazi occupation of 1940-44, arguing that Germany had adopted “silence, legal tricks and delays” since reunification in 1990.

However, the justice minister went further, saying he was prepared to enforce the Supreme Court’s ruling in 2000 relating to the massacre of 218 civilians in the central Greek village of Distomo on 10 June 1944.

The court ruled that Germany should pay €28m (£19.7m) to the relatives of those killed, although the decision was not enforced, and the dispute effectively reached stalemate in international courts in the following years.

The ruling allowed for German-owned property to be seized as compensation but it was never acted on by then-Justice Minister Michalis Stathopoulos.

Among possible assets are property belonging to Germany’s archaeological school and the Goethe Institute, a cultural association.

Greek relations with Germany have deteriorated in recent years because of the financial crisis, with Germany one of the big contributors to the eurozone bailout that began in 2010.

German ministers have been among the most vocal advocates for budget and income cuts in Greece, which has led to growing resentment among Greeks.

The new leftist government in Athens argues that austerity measures be relaxed, a demand opposed by Germany and other eurozone creditor nations.

Germany has been the target of anti-austerity protests in Greece

Germany did pay compensation of 115m Deutsche marks in 1960, as part of an agreement with several European countries for the Nazi occupation.

But Greece says the 1960 deal did not cover key demands, including payments for damaged infrastructure, war crimes and the return of a forced loan exacted from occupied Greece.

Greek Prime Minister Alexis Tsipras said his country would honour its bailout creditors, but that he would not “abandon its irrevocable demands'” for World War Two reparations.