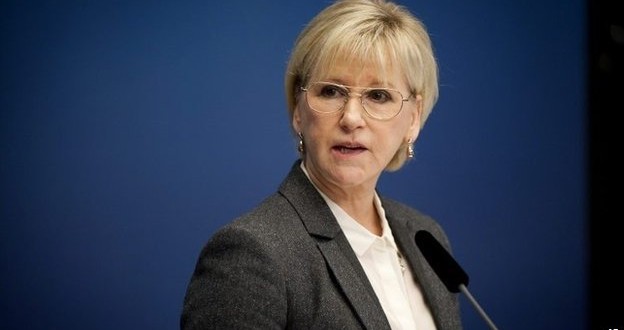 Saudi Arabia has recalled its ambassador to Stockholm amid a row over military ties, Sweden says.

“We were informed yesterday [Tuesday] that Saudi Arabia had called back its ambassador,” said Swedish foreign ministry spokeswoman Veronica Nordlund.

Earlier this week, Sweden said it would end a long-standing defence co-operation deal between the countries.

The agreement, worth millions of dollars in Swedish arms exports, is due to expire in May.

Sweden said it was cancelling the agreement after Saudi Arabia decided to block a speech due to be given by Swedish Foreign Minister Margot Wallstrom to the Arab League earlier this week.

A Swedish foreign ministry spokesman told the AFP news agency the reason given for recalling the ambassador was Sweden’s criticism of Saudi Arabia’s record on human rights and democracy.

He said there were no plans to recall Sweden’s ambassador to Saudi Arabia.

On Monday, Ms Wallstrom posted online a copy of the speech she was due to give in Cairo.

In it, she said the Arab League was a “key partner” for Sweden.

She also highlighted Sweden’s move to recognising a Palestinian state, plus the threat of radicalisation and female genital mutilation.

In February, Ms Wallstrom told the Swedish parliament that Riyadh violated women’s rights and she criticised the flogging of activist and blogger Raif Badawi.