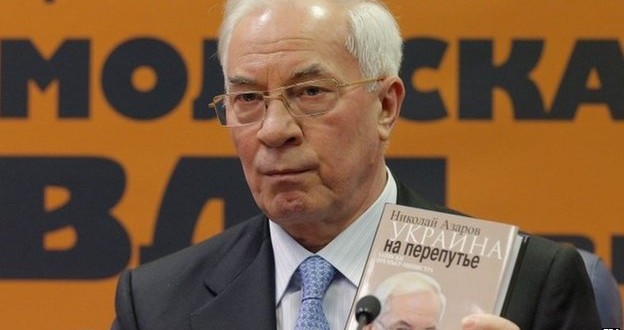 Fresh US sanctions over Ukraine

Former Ukrainian prime minister Mykola Azarov is among those targeted

The United States has imposed sanctions on 14 Ukrainian separatists and Russians, including the former prime minister of Ukraine.

The US said it was freezing assets and prohibiting business with them for allegedly destabilising east Ukraine.

Also included are a Russian bank in Crimea and the Eurasian Youth Union, which the US says is recruiting people to fight in Ukraine.

A ceasefire, albeit not fully observed, has been in place for a month.

Russia said it found the new wave of sanctions “difficult to understand”.

“We categorically do not see any link between what has recently been happening in south-eastern Ukraine and these sorts of actions,” Deputy Foreign Minister Sergei Ryabkov told the news agency Interfax.

President Barack Obama and European leaders have used sanctions as its main form of retaliation for Russia’s annexation of Crimea and backing of separatists groups in eastern Ukraine.

“If Russia continues to support destabilising activity in Ukraine and violate the Minsk agreements and implementation plan, the already substantial costs it faces will continue to rise,” said Adam Szubin of the US treasury department.

Among those targeted for sanctions is former prime minister Mykola Azarov and two other top Ukrainian officials in former President Viktor Yanukovych’s inner circle, for “misappropriation of Ukrainian state assets”.

Also included are five officials in the self-proclaimed Luhansk and Donetsk’s people’s republics and the leaders of Eurasian Youth Union, including Alexander Dugin.

A ceasefire has been in place for nearly a month, although it has not been fully observed

The US says the Eurasian Youth Union has “recruited individuals with military and combat experience to fight on behalf of the self-proclaimed DPR and has stated that it has a covert presence in Ukraine”.

A Russian bank operating in Crimea, now the largest banking network in the region, has also seen its assets blocked by the US.

In a separate development, the US is preparing to send more non-lethal aid to Ukraine, including unarmed drones, an unnamed official told US media on Wednesday.