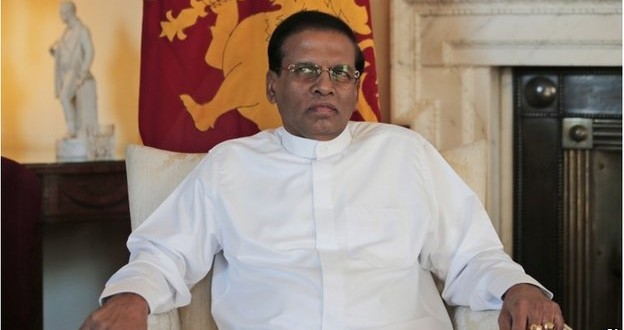 The Sri Lankan president says he hopes to set up a domestic inquiry into alleged war crimes committed during the country’s civil war within a month.

Maithripala Sirisena said UN investigators would not be involved, despite international pressure.

He was speaking to the BBC’s Sinhala service while on a visit to London.

The Sri Lankan army defeated the Tamil Tiger separatists in 2009, ending a 26-year long conflict. Both sides have been accused of atrocities.

He told BBC Sinhala’s Saroj Pathirana that advice from the UN would be taken into account but there was no need for them to be involved in the inquiry.

On issues where Mr Rajapaksa always seemed implacable, President Sirisena appears to have opened the door just a little wider.

So Sri Lanka will still not allow UN war crimes investigators to visit. But, said the president, “we can take account of their opinion in doing our work, to make it more fruitful”. That is worlds away from the old government’s position.

His National Security Council will, he said, examine details of people, mostly Tamils, who have been in detention without charge, some for years, and will report back suggesting charging them or freeing them.

He insisted there was now space for open dialogue and dissent on issues including war crimes.

But he said he “doesn’t believe” war crimes allegations contained, for instance, in the documentary “No Fire Zone”, which was shown on the UK’s Channel 4.

The UN agreed last month to delay its long-awaited report into alleged war crimes in Sri Lanka, saying the new government was more willing to co-operate than the previous administration.

In his interview, he echoed allegations that Mr Rajapaksa tried to mount a coup after his loss but was thwarted by the election commissioner and police chief.

Mr Sirisena received large numbers of votes from Tamils and Muslims in the poll, the country’s two largest minorities.

He said he was committed to reconciliation: “We expect to begin a new journey to promote reconciliation, cohabitation, brotherhood and friendship among the people of Sri Lanka, and to win over international opinion on these issues.”