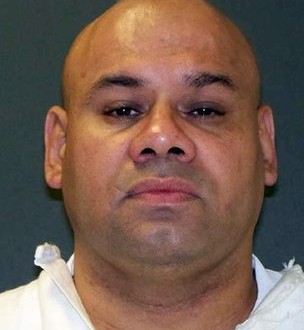 Manuel Vasquez was the fourth man executed in Texas this year

Texas is down to its final dose of lethal injection drugs after the US state executed a man on Wednesday.

States across the country have seen their drug inventories dwindle after European manufacturers opposed to capital punishment have refused to sell the lethal concoctions.

Manuel Vasquez was the fourth Texas inmate executed this year. Six more executions are set in the coming weeks.

Vasquez, a gang member, was convicted of strangling a San Antonio woman.

The 46-year-old man died 17 minutes after the drug was administered.

The sister of his victim, 51-year-old Juanita Ybarra, was among witnesses watching through a window. Vasquez killed Ybarra in 1998 over a drug debt, police said.

Vasquez, in a final statement, told his family and friends he loved them and thanked “the Lord for his kind mercy, faithfulness and unconditional love”.

Amid a shortage of the deadly drugs and concerns after several botched executions, US states are looking for alternatives to lethal injections.

The Utah Senate passed a bill on Tuesday that would resume the use of firing squads to carry out the death penalty if lethal injections drugs are not available.

Arkansas is also considering allowing firing squads while Oklahoma could approve the use nitrogen gas to execute inmates.