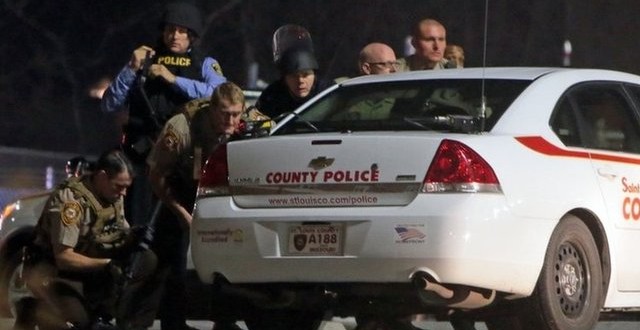 Eyewitness Keith Rose: “I saw one officer covered in blood – I saw officers running to the aid of that officer”

Two US police officers have been shot in Ferguson, a Missouri town hit by riots over the killing of an unarmed black teenager last year.

One officer was shot in the face and one in the shoulder, St Louis County police chief Jon Belmar said.

Both suffered “very serious gunshot injuries” but were conscious, he said.

They were shot during a demonstration after the resignation of Ferguson’s police chief, which followed a report alleging racial bias in his department.

Protesters had gathered outside Ferguson police headquarters late on Wednesday, in what was initially a relatively low-key demonstration.

But shortly after midnight at least three shots were fired as the crowd of protesters was starting to break up, Mr Belmar said.

He said he was assuming that “these shots were directed exactly at my police officers”, rather than the officers being hit by stray bullets.

One protester, Keith Rose, said he saw an officer “covered in blood”, and that other officers were carrying and dragging him, leaving a trail of blood on the ground.

Police had been keeping protesters in the area in order to take witness statements, he said.

Demonstrators were calling for further action to be taken over the federal report, and for more resignations in the police department, Mr Rose said.

Police chief Thomas Jackson was the sixth Ferguson official to be fired or step down. He had initially resisted calls from protesters and some state leaders to resign.

Mr Jackson was widely criticised after the shooting of 18-year-old Michael Brown in August and the weeks of demonstrations that followed.

Demonstrators gathered outside the Ferguson police department late on Wednesday

Police took cover after shots were fired shortly after midnight

In November, a St Louis County grand jury and the US Justice Department found that white police officer Darren Wilson did not break any laws when he shot Brown.

However, Brown’s shooting and the riots that followed spurred a federal investigation. It found overwhelming racial bias in the town’s policing practices, though Darren Wilson was cleared of civil rights violations.

The report noted public officials regularly made tickets and other minor violations “go away” for white friends, while some black residents spent nights in jail for non-payment of fines.

It also found that black residents were disproportionately subjected to baseless traffic stops and citations for minor infractions such as walking down the middle of the street.

Ferguson’s police force had three black officers, despite the fact that the town of 21,000 people was predominantly black.

US Attorney General Eric Holder has said the federal government will “use all power that we have to change the situation”.

That could include dissolving the police force and turning over law enforcement responsibilities to neighbouring agencies.

A local Democratic party leader, Patricia Bynes, said “a lot of anger” had built up in Ferguson because more action had not been taken sooner.

“The longer they continue to draw things out, the angrier people get,” she said. “And when they finally start doing the right thing, it just is not enough.”

The names of the two officers wounded on Thursday were not given, but Mr Belmar said one was a 32-year-old from another St Louis suburb, Webster Groves, and the other a 41-year-old from St Louis County.

Black people are disproportionately stopped by police, even allowing for their greater numbers in the city