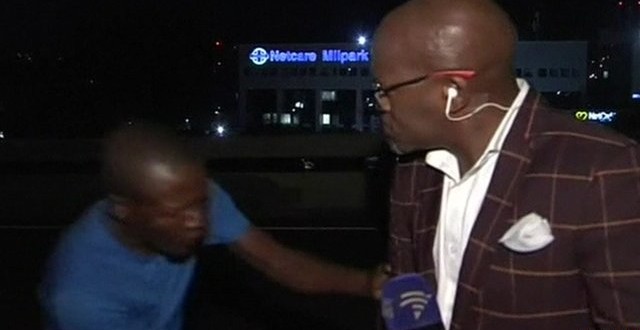 Vuyu Mvoko, a contributing editor with national network SABC, was robbed as he was about to go on air in Johannesburg.

Footage of the incident – in which both robbers’ faces are visible – has been widely viewed online.

The robbers appear unconcerned by the presence of the camera. Mr Mvoko said one of them threatened him with a gun.

The journalist had been waiting outside Johannesburg’s Milpark hospital to report on the arrival of Zambia’s president for medical tests on Tuesday night.

The men did not bother concealing their identities

The thieves told him to hand over his phone, which he said was in his hand.

“Because I wasn’t giving him the phone, he then called the other one who had a gun, and said: ‘Dubula le nja’ [Shoot this dog],” Mr Mvoko told SABC.

At this point he said another member of the team screamed at him to hand over the phone, which he did.

The BBC’s Pumza Fihlani in Johannesburg says Milpark is a relatively quiet area, not normally associated with crime.

Zambia’s President Edgar Lungu, who had collapsed at an event on Sunday, went to South Africa for tests after his doctors found that he needed throat surgery.