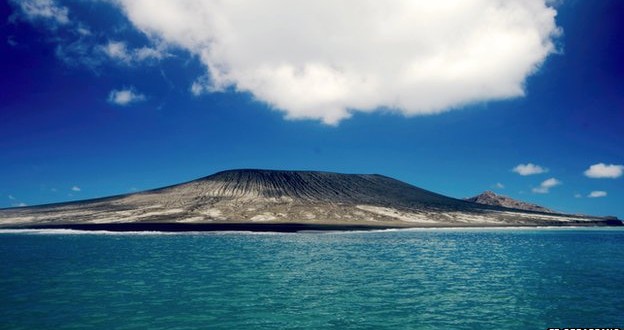 A new island has been formed in the South Pacific after the eruption of an underwater volcano in Tonga.

The island – which is 500m (1,640 feet) long – was formed after an eruption at the Hunga Tonga volcano that started in December.

One scientist said the island was likely to be highly unstable, and dangerous to visitors.

The volcano – the full name of which is Hunga Tonga-Hunga Ha’apai – erupted for the second time in five years in December.

Video captured on a boat hundreds of metres from the volcano showed fast-rising plumes of gas emerging from the sea.

Satellite images taken within days of the eruption showed new rock formations, and more sediment in the sea.

And next to one of the two islands that previously made up Hunga Tonga-Hunga Ha’apai was a large circular crater.

A resident of Tonga’s main island captured striking images of the new island from its surface.

Gianpiero Orbassano, who owns a hotel in Tonga, travelled to the island with two friends and said he was likely to make another trip soon.

“It’s really quite solid once you are on it and it’s quite high,” he said.

“It felt quite safe – the only difficult thing was getting out of the boat on to the island. The surface was hot, you could feel it. And climbing it was hard in the bright sun.”

Mr Orbassano, 63, had previously travelled to another new volcanic island in the Pacific, where friends took golf clubs to play on the new landscape.

“I don’t feel risk,” he said. “When I am doing this kind of thing, I’m focusing on my photographs. I don’t feel danger.”

Footage of the Hunga Tonga volcano erupting was captured in January 2015.

Mary Lyn Fonua, editor of the Matangi Tonga news website, travelled by boat to view the eruption in January.

She said: “We got to within 700m of the volcano and when you’re that close in a small boat, it can be quite risky.

“An underwater volcano behaves quite differently – all the gas can shoot out to the side. But it was a fascinating thing to see, just to watch a whole new island being constructed.”

A satellite image of Hunga Tonga before the eruption

A large new crater emerged after the eruption last December

Mrs Fonua said she was unlikely to get closer to the new island: “Its quite fragile really, I don’t really think you should go on it. And we don’t really know if the eruption has finished either.”

Matt Watson, a reader in natural hazards at the University of Bristol, said the surface of the island was likely to be “highly unstable”.

“It will be very loose and unconsolidated material,” he said. “It’s formed by fragmentation of magma, so it’s basically small pieces of rock on top of each other that have formed an island.

“That’s also going to make it more vulnerable to the waves. It’s going to be battered by some of the waves and currents, particularly in Tonga.”

Dr Watson said he would be staying far from the volcano if he was in Tonga. “You would really have to strongly convince me, with strong scientific reasons, to go on it,” he added.