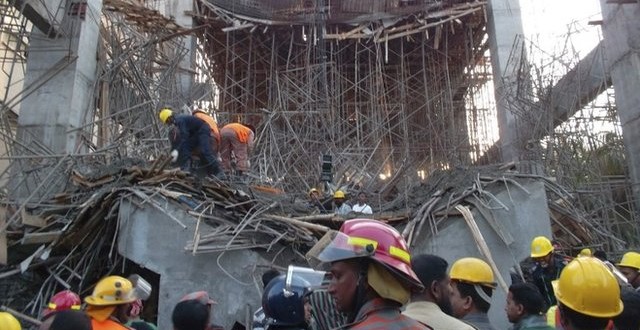 The BBC’s Akbar Hossain reports from Dhaka: ”They hope they can rescue more people alive from the rubble”

At least eight people have died after a cement factory partially collapsed in Bangladesh, police say.

About 70 people were in the building in the port town of Mongla, 200km (125 miles) south-west of the capital Dhaka, when the roof gave way. The factory had been under construction.

More than 60 people were rescued and many were taken to hospital. Many had been working on the roof itself.

Bangladesh has a history of poor building safety standards.

The collapse of the Rana Plaza complex in Dhaka left more than 1,130 people dead in 2013. Most of them had worked in the garment industry.

The disaster was one of the world’s worst industrial accidents.

Many of the workers were on the roof when it collapsed, survivors said

Almost 60 people were rescued from the collapsed cement factory

Rescuers have seen two more bodies but have not said how many more workers remain missing.

The cement factory compound is army-owned but the construction work was being carried out by a Chinese-owned firm.

Survivors said dozens of the men had been working on the roof when it collapsed.

Footage broadcast on television in Bangladesh showed piles of scaffolding, metal and concrete at the bottom of the building.