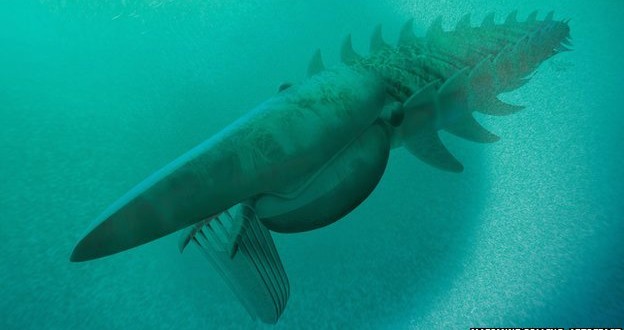 The animal was one of the largest alive at the time

Scientists have discovered a bizarre human-sized lobster ancestor that lived 480 million years ago.

The monster used spiny “limbs” on its head to sift food from the ocean.

It also had pairs of fins along both sides of its 2m-long body, which are precursors of the double limbs seen in many of its living relatives.

This adds to our picture of how modern “arthropods” developed – a group of animals that includes crustaceans, spiders and insects.

An unusually well-preserved fossil from Morocco was the key to the discovery.

Reported in Nature, the research was carried out by scientists at Oxford and Yale Universities.

The fossil itself was first found by fossil hunter Mohamed Ben Moula and is named in his honour: Aegirocassis benmoulae. The first part of the name refers to a giant Norse sea god (Aegir) and the Latin for helmet (cassis).

The beast belongs to a very early family of sea creatures called “anomalocaridids”, which first appeared 520 million years ago during the Cambrian period. This new species, living some 40 million years later in the early Ordovician period, was probably among the last of its kind.

“This would have been one of the largest animals alive at the time,” said Dr Allison Daley from Oxford University.

Most of the anomalocaridids were predators that hunted and ate other marine animals. But the Aegirocassis seems to have used its head appendages, bristling with tiny spines, as a net to trap tiny tidbits of food – making it a “filter feeder” like present-day whales.

This changes our picture of that period’s marine environment, Dr Daley said.

“These animals are filling an ecological role that hadn’t previously been filled by any other animal. While filter feeding is probably one of the oldest ways for animals to find food, previous filter feeders were smaller and usually attached to the sea floor.

“We have found the oldest example of gigantism in a freely swimming filter feeder.”

The remarkable specimen was preserved in three dimensions, instead of being squashed flat like most previous examples of anomalocaridids. Dr Daley explained this was crucial to the findings.

“Without these 3D remains, we may never have got the insight into these animals’ anatomy that we did,” she said.

The fossil was unusually well preserved in three dimensions