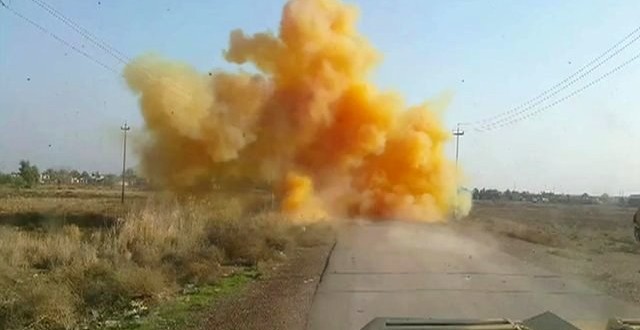 IS ‘using chlorine gas’ in bombs

The videos show bomb disposal teams carrying out controlled explosions, which send plumes of orange smoke into the air.

The bombs contain small concentrations of a chemical agent and in open ground are unlikely to be lethal.

Experts say they are designed to create fear rather than harm.

There have been multiple reports that IS has been deploying chlorine gas since late last year, but Iraqi officials say their footage confirms its use.

Haider Taher, from the Iraq Bomb Disposal Team, said troops have defused dozens of devices containing chlorine as part of the offensive against the militants.

“They have resorted to this new method,” he told the BBC. “They’re putting chlorine inside these homemade roadside bombs, which is toxic for those that inhale it.”

His team inadvertently exploded one of the weapons outside the embattled city of Tikrit in the north of Iraq six weeks ago.

“Our throats were blocked, we couldn’t breath. My ears felt enormous pressure… we were lucky a military ambulance was there to treat us,” Mr Taher said.

Chlorine gas is classified as a “choking agent”, burning the lungs when inhaled in large quantities. But it is nowhere near as dangerous as nerve gases.

It is instead designed to create fear and panic, according to chemical weapons expert Hamish de Bretton Gordon.

“It is a psychological thing, to not only get civilians in Tikrit worried, but also the Iraqi soldiers who are doing the bomb disposal here,” he said.

Roadside bombs are cheap and easy to make in Iraq and are widely used by militants.

Although bomb disposal teams say they have encountered the small-scale use of chlorine, there is no evidence to suggest IS has accumulated a significant chemical weapons cache.