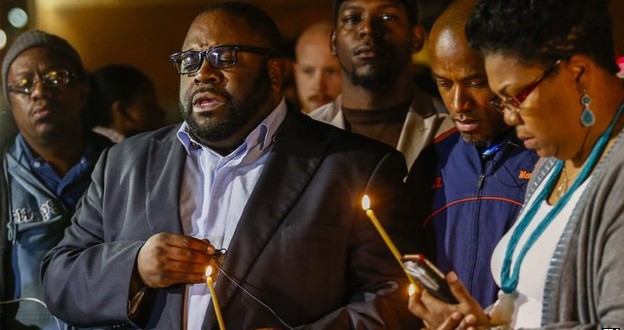 Ferguson on edge after shootings

Dozens of demonstrators have returned to the streets of Ferguson, Missouri, one night after two police officers were wounded during a protest.

Authorities on Thursday continued to search for suspects in the early morning shooting as the two officers were released from hospital.

Thursday’s protests were peaceful, but similar events have escalated into confrontations with police.

Ferguson police have ceded security responsibilities to outside agencies.

The fatal shooting of Michael Brown, an unarmed black teenager, last year in Ferguson sparked protests about the police use of lethal force. The shootings occurred during protests after the announcement that Ferguson Police Chief Thomas Jackson would resign.

One officer was shot in the face and the other was hit in the shoulder as protestors were heading home for the night.

Mr Jackson quit one week after a Justice Department report alleging widespread racial bias in his department and the city’s court system. Mr Jackson was the sixth Ferguson official to be fired or step down. He had initially resisted calls from protesters and some state leaders to resign.

Tensions have been high in Ferguson since August and escalated in November after a grand jury declined to prosecute officer Darren Wilson for Brown’s killing.

On Thursday, protestors held a candlelight vigil for all victims of violence. They later marched to the police department while beating drums and chanting.

The BBC’s Franz Strasser and David Botti in Ferguson say police on the scene are keeping their distance from protesters and avoiding a large show of force. There were no rows of police officers in riot gear unlike previous demonstrations.

The shootings were the first time in eight months of protests that officers were struck by gunfire, despite several instances of gunfire at previous demonstrations.

“Last night shows that things aren’t over,” said Sonya Roberts, owner of SK’s PX Market on West Florissant Avenue in Ferguson. “Quiet came to the city, but then the DOJ announcement and the resignations came,” said Ms Roberts told the Reuters news agency.

Earlier on Thursday, a tactical police unit descended on a home in the city and detained several people for questioning. They have all since been released.

US President Barack Obama addressed the situation in Ferguson during an appearance on the ABC programme “Jimmy Kimmel Live” on Thursday.

“What had been happening in Ferguson was oppressive and objectionable and was worthy of protest,” Mr Obama said. “But there was no excuse for criminal acts, and whoever fired those shots shouldn’t detract from the issue. They’re criminals. They need to be arrested,” he said.