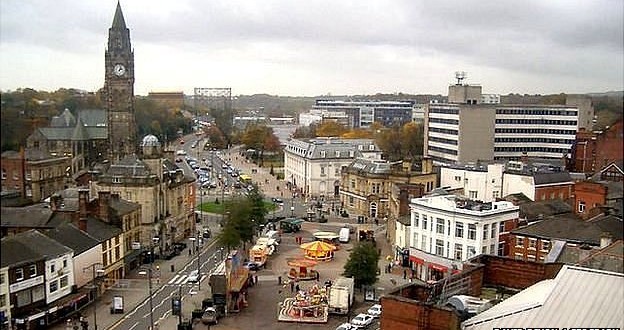 Nine men were jailed in 2012 for crimes including rape, trafficking and child sex abuse in Rochdale

Greater Manchester Police (GMP) has admitted it should have focused more on investigating sex abuse in Rochdale than examining victims’ credibility.

The force apologised after a review highlighted failures “at individual and force level” into its dealings with victims between 2008 and 2010.

Police chiefs were “distracted” by achieving targets on burglary and other crime, the report said.

However, no officers will face any misconduct proceedings, GMP said.

The review, which examined police misconduct, was conducted by the police force with supervision from the Independent Police Complaints Commission (IPCC).

It focused on the initial investigation into sexual assaults on two girls – which came to police attention in 2008 – and wider decisions made by the leadership in the force’s Rochdale division.

One victim’s allegation of abuse was initially not prosecuted after the Crown Prosecution Service considered her to be unreliable, the review said.

It was only after the second girl made similar claims in December 2009 that detectives began Operation Span into allegations of child sex abuse.

GMP found more than 40 vulnerable girls across Rochdale and Heywood were subjected to grooming by a network of men, mostly takeaway workers and taxi drivers.

In 2012, nine men, eight of Pakistani and one of Afghan heritage, were jailed for crimes including rape, trafficking and child sex abuse, with sentences ranging from four to 10 years.

Assistant Chief Constable Dawn Copley admitted there had been a “complete lack of understanding” of child exploitation in Rochdale and a failure to recognise the “scale of abuse”.

Although the review was conducted internally, it was being published due to “significant public interest”, she added.

Seven officers were served misconduct notices but only one now-retired detective inspector was described as having a “case to answer”.

Therefore no action will be taken against any officers, who have all been offered further training, GMP said.

Rochdale MP Simon Danczuk said the report showed there was “there was a culture in GMP, which turned a blind eye to those sorts of crimes”.

ACC Copley acknowledged that “victims were let down”.

“We apologise to the victims and we give them our assurance that lessons have been learned, changes have been made and we are determined to use this to continue making improvements,” she said.