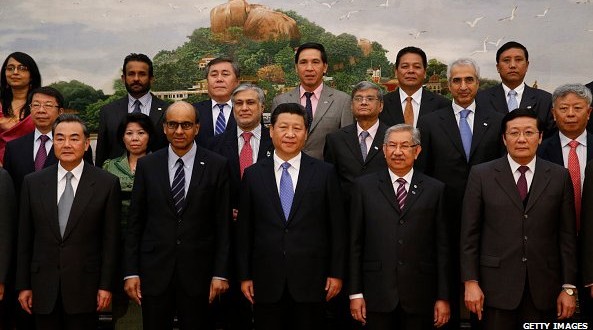 US row with UK over China-led bank

The Asian Infrastructure Investment Bank agreement was signed in October by 21 countries, including China

The US has expressed concern over Britain’s effort to become a founding member of a Chinese-backed bank that could rival the likes of the World Bank.

The UK is the first big Western economy to apply for membership of the Asian Infrastructure Investment Bank (AIIB).

The AIIB will fund Asian energy, transport and infrastructure projects.

However, the US has raised questions over the bank’s commitment to international standards on governance.

In a statement, UK Chancellor George Osborne said the UK had “actively promoted closer political and economic engagement with the Asia-Pacific region” and that joining the AIIB at the founding stage would create “an unrivalled opportunity for the UK and Asia to invest and grow together”.

The hope is that investment in the bank will give British companies an opportunity to invest in the world’s fastest growing markets.

But the US sees the Chinese effort as a ploy to dilute US control of the banking system, and has persuaded regional allies such as Australia, South Korea and Japan to stay out of the bank.

In response to the move, US National Security Council spokesman Patrick Ventrell said: “We believe any new multilateral institution should incorporate the high standards of the World Bank and the regional development banks.”

“Based on many discussions, we have concerns about whether the AIIB will meet these high standards, particularly related to governance, and environmental and social safeguards,” he added.

Joining the AIIB would help the UK and Asia invest and grow together, UK Chancellor George Osborne said

It’s a tricky task to align oneself with both China and the US. The Americans are apparently unhappy with the UK, while China has welcomed the British application.

It may be a pragmatic move, but it’s hard not to offend one side or another.

I suspect this will be the first of many decisions to be taken by countries such as the UK to position themselves between the new economic superpower and the existing one.

The trick will be to come away with economic advantage at minimal political cost. We’ll find out if this one will pay off for the UK.

Why does the UK want to join a China-led bank?

But in November last year, Australia’s Prime Minister Tony Abbott offered lukewarm support to the AIIB and said its actions must be transparent.

The Financial Times (FT) newspaper reported on Thursday that US officials had complained about the British move.

The report cited an unnamed senior US administration official as saying the British decision was taken after “virtually no consultation with the US”.

“We are wary about a trend toward constant accommodation of China,” the newspaper quoted the US official as saying.

However, in response to the UK announcement, World Bank president Jim Yong Kim told a news conference he supported the goals of the AIIB.

“From the perspective simply of the need for more infrastructure spending, there’s no doubt that from our perspective, we welcome the entry of the Asian Infrastructure Investment Bank,” he said.

The founding member countries of the AIIB have agreed the basic parameters that would determine the capital structure of the new bank would be relative gross domestic product.

That’s significantly different than the Asia Development Bank, which has a similar structure to the World Bank and has been in existence 1966. There, the majority stakes are controlled by Japan and the US.