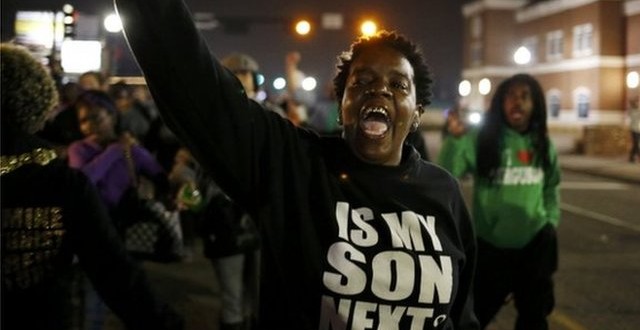 Laura Trevelyan reports: “This is a pivotal moment for Ferguson”

US President Barack Obama says there is “no excuse” for criminal acts in Ferguson, Missouri, one night after two police officers at a protest were shot.

He said the protesters had “legitimate grievances” but described the shooters as “criminals” who should be arrested.

Wednesday’s shootings happened during a demonstration after it was announced the Ferguson Police Chief would resign.

Further protests late on Thursday passed peacefully. The two officers have been released from hospital.

The protests are the latest of many in the city since a policeman shot dead Michael Brown, an unarmed black teenager, last year.

Protesters gathered outside the police station after Mr Jackson’s resignation was announced.

Late on Wednesday, one officer was shot in the face and the other was hit in the shoulder as protestors were heading home for the night.

“I think that what had been happening in Ferguson was oppressive and objectionable and was worthy of protest. But there was no excuse for criminal acts,” President Obama said on the Jimmy Kimmel Live programme on ABC.

“Whoever fired those shots shouldn’t detract from the issue; they’re criminals,” he added.

Tensions have been high in Ferguson since August and escalated in November after a grand jury declined to prosecute officer Darren Wilson for Brown’s killing.

On Thursday, protesters held a candlelight vigil for all victims of violence. They later marched to the police department while beating drums and chanting.

Police on the scene kept their distance from protesters and avoided a large show of force, the BBC’s Franz Strasser and David Botti in Ferguson reported.

There were no rows of police officers in riot gear unlike previous demonstrations.

Barack Obama: “They’re criminals. They need to be arrested”

Wednesday’s shootings were the first time in eight months of protests that officers had been struck by gunfire, despite several instances of shooting at previous demonstrations.

Earlier on Thursday, a tactical police unit descended on a home in the city and detained several people for questioning in relation to the police shootings. They have all since been released.