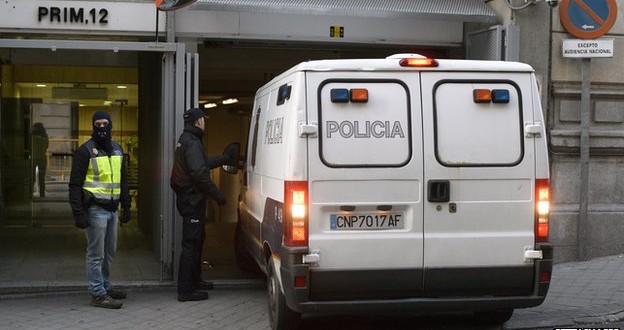 The arrests follow previous raids, including one in December

Spanish police have arrested eight people alleged to belong to a jihadist cell in a series of dawn raids across the country.

Those held are suspected of recruiting volunteers to fight in Syria and Iraq, and encouraging attacks within Spain.

The arrests took place in Barcelona and Girona in the north-east, and Avila and Ciudad Real in central Spain.

A total of 21 suspected Islamic militants have been arrested the country so far this year.

On Tuesday, police arrested two suspects described as “physically and mentally prepared for jihad” in Spain and neighbouring countries.

No details have been given about the suspects’ identitities.

Spanish authorities believe about 100 people have travelled from Spain to Iraq and Syria to join the ranks of Islamist groups.