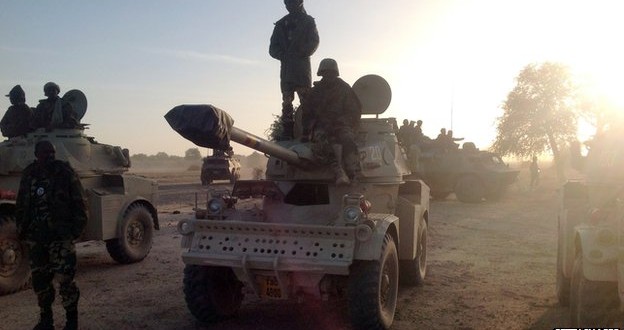 The South African government is concerned its nationals may be working as mercenaries in Nigeria in the war against the Boko Haram militant group.

Nigerian government spokesman Mike Omeri told the BBC that foreigners were just training troops in the use of new weapons.

But the South African government says the men may be involved in fighting.

Nigeria and its neighbours have recently recaptured several towns and villages from Boko Haram, which is allied to Islamic State (IS).

Thousands of people have been killed, mostly in north-eastern Nigeria, since it began its insurgency in 2009.

It is hard to explain why there had to be six years of carnage in north-east Nigeria before the necessary equipment was bought and aggressive, decisive action was taken against Boko Haram.

But now the Nigerian authorities are taking all the help they can get and have achieved some success against the jihadists. Whether we call them mercenaries or military trainers, as the Nigerian government would prefer, the hired men from South Africa and the former Soviet Union are deployed in the theatre of war and some are armed.

Some have been helping train the Nigerian troops on how to use the recently acquired military equipment including helicopter gunships, tanks and armoured vehicles. But the South African authorities suspect this is cover for illegal mercenary work.

For the Nigerian government, the issue of mercenaries is a sensitive one and adds to the already difficult job of explaining why it ever became necessary for the neighbouring armies of Chad, Niger and Cameroon to deploy inside Nigeria.

It is against the law for South Africans to fight overseas for private gain.

South Africa’s Defence Minister Nosiviwe Mapisa-Nqakula told the BBC that anyone suspected of fighting in Nigeria would be investigated by South African police.

No serving members of South Africa’s armed forces were in Nigeria, the minister added.

The presence of South African mercenaries was first reported by a South African newspaper in January, and speculation intensified after a photograph circulated on Twitter last week showing a white man in a khaki T-shirt and body armour, next to a heavy-calibre machine gun.

The location of the photo was later identified as Maiduguri in north-east Nigeria, close to the fighting with Boko Haram.

On Thursday, South African websites reported that a mercenary from the country had been killed in an incident of friendly-fire in Nigeria. Two anonymous sources speaking to the French news agency AFP confirmed the incident.

The South African government has acknowledged the death of one of its citizens in Nigeria, the New York Times reports.

“We are disturbed by the death of this one person,” defence spokeswoman Joy Peters told the paper.

“Unfortunately, they went to Nigeria in their own personal capacity. We’d like to advise that this would serve as a warning to others who are considering engaging in such activities to really think twice and consider the repercussions.”

Alongside South Africans, mercenaries from former Soviet Union countries are also reported to be taking part in the conflict.

In addition, regular soldiers from Chad, Niger and Cameroon have been working with the Nigerian military to recapture towns and villages in north-east Nigeria which have fallen under the control of the Islamist fighters.