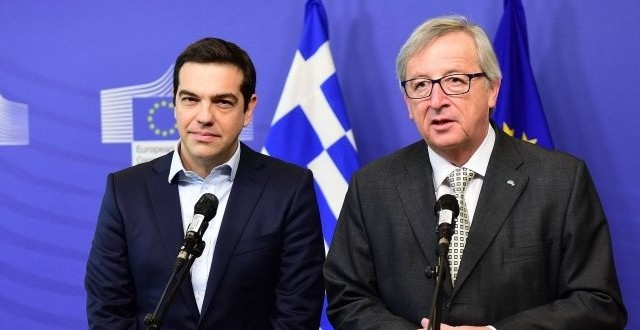 Jean-Claude Juncker: “I do not think we have made sufficient progress but we will try to push in the direction of a successful conclusion”

Before meeting Greek Prime Minister Alexis Tsipras in Brussels, Mr Juncker said he was “not satisfied”.

The leftist leader has pledged to end austerity – but his plans have met resistance from Greece’s EU creditors.

To persuade the EU of its credit-worthiness, Greece has announced a series of reforms. But it also wants the EU to agree new terms for the long-term repayment of its debts.

If no agreement is reached, Greece risks being unable to meet its obligations. Within the next two weeks alone, it needs €6bn (£4.3bn; $6.4bn) to pay its creditors.

Alexis Tsipras: “We are doing our part, and we expect our partners to do their own”

Mr Juncker said he was “not satisfied with the developments in recent weeks”.

“I don’t think that we have made sufficient progress, but we’ll try to push in the direction of a successful conclusion of the issues we have to deal with.”

However, he ruled out failure in the talks, which could precipitate Greece’s exit from the eurozone.

“I am totally excluding a failure, I don’t want a failure. I would like Europeans to go together. This is not the time for division,” he said.

Speaking alongside Mr Juncker, Mr Tsipras said he remained optimistic. “If there is political will, everything is possible,” he said.

In an earlier meeting with the president of the European Parliament, Martin Schulz, Mr Tsipras urged the EU to back growth in Greece.

The austerity measures have fuelled Greeks’ resentment of international institutions

Analysts have described last month’s interim bailout agreement as a climbdown for the Greek government, which rose to power on promises to have half of the country’s debt rewritten off.

Mr Tsipras has defended the deal, but some on the hard left have accused Syriza of going back on pre-election pledges.

Even if the bailout extension goes through, Greece still faces the huge task of trying to service its debt obligations.

It will need to flesh out its reform programme in detail by April and prove that reforms are bedding down before receiving a final bailout disbursement of €7.2bn.

But in the meantime Greece has to repay several billion euros in maturing debts, including about €2bn to the IMF in March, and €6.7bn in European Central Bank bonds maturing in July and August.