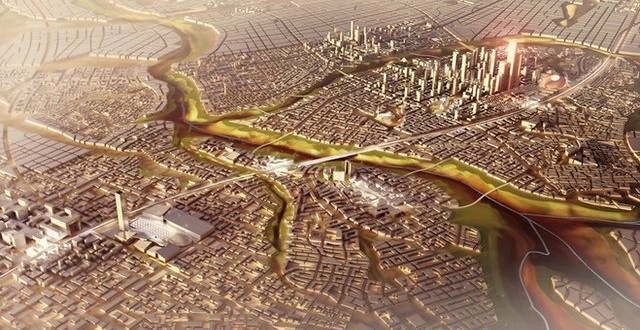 The BBC’s Orla Guerin: “If and when it is completed it will be about the size of Singapore with an airport larger than Heathrow”

The Egyptian government has announced plans to build a new capital to the east of the present one, Cairo.

He said the aim was to ease congestion and overpopulation in Cairo over the next 40 years.

The announcement was made at an investment conference that aims to revive the Egyptian economy.

The gathering, in the Red Sea resort of Sharm el-Sheikh, has attracted pledges worth $12bn (£8bn) in aid and investment from Kuwait, Saudi Arabia and the United Arab Emirates.

Mr Madbouly said the population of greater Cairo, estimated at about 18 million, was expected to double within 40 years.

The Egyptian parliament and its government departments and ministries, as well as foreign embassies, would move to the new metropolis, he said.

“We are talking about a world capital,” he added.

Developers say the new city – the name of which has not been revealed – would include almost 2,000 schools and colleges and more than 600 health care facilities. They say the project will create more than a million jobs.

It is planned to be built over 700 sq km (270 sq miles) and house about five million residents.

Planners say the proposed city’s site “is situated along the corridor between Cairo and the Red Sea, providing linkages to significant shipping routes.

“It is a natural extension for the city of Cairo,” Mr Alabbar told the BBC, saying that the new development would sit on the edge of the existing city.

“It is a wonderful opportunity to be able to design something from scratch, and to design it keeping in mind the needs of the Egyptian people and the Egyptian government.”

He said that the builders would be deploying the most advanced design techniques on the project, and that the city would breed “confidence” and “pride” in Egyptians.

The new capital is as yet unnamed, but it sounds like an Egyptian version of Shangri La. It’s being billed as a smart sustainable city, on a grand scale.

If and when it’s completed – and that could take years – it will be about the size of Singapore, with an airport larger than Heathrow.

The idea is to lure Egyptians away from the chaotic sprawl of Cairo – where congestion and pollution seem as constant as the waters of the Nile.

The authorities say it will spark a renaissance in the economy. Perhaps, but many here recall other flagship projects – which stalled in the past. Egyptian bureaucracy can be as enduring as the pyramids.

President Abdul Fattah al-Sisi can’t afford this to fail. Without tangible economic progress there could be more unrest ahead.

The move follows those of a number of other countries, including Brazil and Nigeria, that have shifted their capital cities.

The US Secretary of State, John Kerry, has praised recent economic reforms in Egypt, and urged businesses to invest in the country.

Mr Kerry was also attending the economic conference in Sharm el-Sheikh to discuss ways to revive the Egyptian economy.

Dozens of major infrastructure projects have been unveiled, attracting billions of dollars’ worth of outside investment. Saudi Arabia, Kuwait and the United Arab Emirates have each pledged $4bn of investments in Egypt,

The conference comes after years of political upheaval and severe, ongoing, tensions in Egypt.