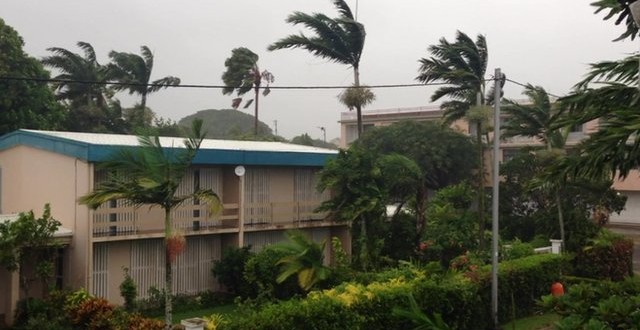 Unicef’s Alice Clements in Vanuatu’s capital: “I’m in a very strong hotel, but even this is getting shakes when wind gusts come through”

The death toll from a category five tropical storm that has hit islands in the South Pacific could run into the dozens, the UN’s relief agency says.

Cyclone Pam battered Vanuatu with winds of up to 270kph (170mph) on Friday.

Authorities on the islands had earlier issued a red alert to residents after the cyclone changed direction and began moving towards populated areas.

It has already caused major damage on other Pacific islands, including Kiribati and the Solomon Islands.

“The immediate concern is for a very high death toll but also an enormous amount of destruction and devastation,” Sune Gudnitz, regional director for the UNOCHA, told Reuters news agency from nearby Fiji, which is also expecting to be hit by Pam.

There were unconfirmed reports that 44 people had died in Penama province in the north-east of Vanuata, the UNOCHA said in a statement on Friday, according to Reuters.

Jay Wynne looks at the track of Cyclone Pam

Meanwhile, category three Cyclone Olwyn has hit the coast of Western Australia with wind gusts of up to 195kph (120mph).

People in the state’s coastal region were warned to move to higher ground to escape dangerous flooding.

Cyclone Pam destroyed homes and flooded crop areas in Kiribati and the Solomon Islands before moving on to Vanuatu and Tuvalu. At least 3,000 households were said to have been affected.

A satellite image showing three cyclones near Australia, with Pam to the north-east

Port Vila, the capital of Vanuatu, experienced heavy winds and rain on Friday

All six provinces are under red alert, meaning people are advised to immediately head to shelter.

He said the cyclone was expected to be worse than Cyclone Uma, which killed 50 people in 1987.

Earlier on Friday, Alice Clements, an official with the UN children’s agency Unicef, told the BBC that the capital had become a ghost town as people took shelter.

“The winds have intensified and the skies have totally clouded over, you can’t see the sea or the hills now. Foliage is thrashing around and the wind and rain has been torrential,” she said.

“People are anxious; it’s been a very long time since Vanuatu has seen a cyclone this big.”

The Vanuatu country director for Save the Children, Tom Skirrow, told the AFP news agency that he was concerned about families living in shanty town areas.

“Thousands of families are living in makeshift, flimsy houses which will not withstand the immense winds and rain we’re expecting. Families need to urgently evacuate to safe buildings or the results could be catastrophic.”

Are you in the region and preparing for Cyclone Pam? You can email your experiences to [email protected].