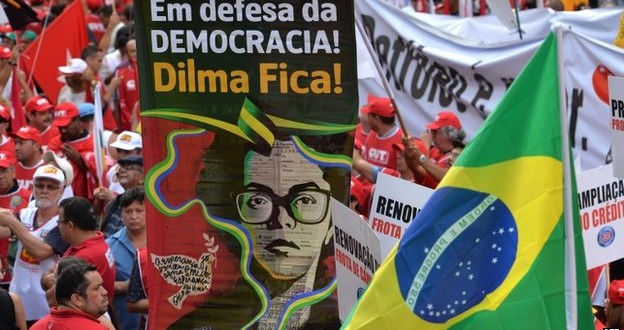 “In defence of democracy! Carry on, Dilma!” reads the banner at a march in Sao Paulo

Thousands of government supporters across Brazil have been taking part in marches to show their backing for President Dilma Rousseff.

The opposition has called for Ms Rousseff’s impeachment over a a huge corruption scandal in the state-owned oil company, Petrobras.

Most of the politicians accused of taking bribes are from Brazil’s governing coalition.

Anti-government marches are expected to take place on Sunday.

Ms Rousseff was head of Petrobras for seven years, when much of the corruption is believed to have taken place.

But she has not been implicated in the corruption scandal.

Government supporters say the calls for her impeachment, less than four months after she was re-elected to a second four-year term, amounts to a coup attempt.

Pro-government demonstrations are going ahead in 14 Brazilian states. Most of them have been called by unions that support the governing Workers’ Party.

“I am here to prevent that they take away the social benefits we have earned,” said 69-year-old Alaide Pereira da Silva at a march in the city of Ribeirao Preto, in Sao Paulo state.

“We can’t blame Dilma [Rousseff]. The congressmen are to blame. She doesn’t govern on her own,” she told O Globo newspaper.

Last week, the Supreme Court approved the investigation of 54 people for their alleged involvement in the kickback scheme.

The list was prepared by the Attorney General, Rodrigo Junot, who alleged that private companies paid corrupt officials in order to get lucrative Petrobras contracts.

Petrobras has 87,000 employees and is seen as a pillar of Brazil’s economy

According to the investigation, high-profile politicians also took a share of the money siphoned off from the oil company.

In December, prosecutors charged executives from six of the country’s largest construction firms for allegedly channelling kickbacks into a Petrobras scheme to pay politicians.