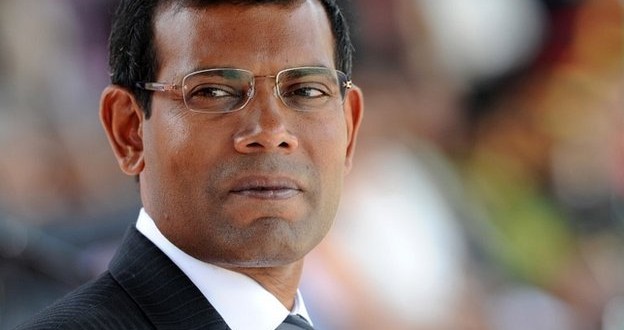 A former president of the Maldives has been sentenced to 13 years in prison after he was found guilty of ordering the arrest of a judge while in office.

Mohamed Nasheed was cleared of the charges last month, but was re-arrested and charged under anti-terrorism laws.

His lawyers quit during the second trial, which they said was biased and intended to end his political career.

Hundreds of supporters have been protesting on a regular basis since Mr Nasheed’s arrest last month.

Both the US and India have both voiced concerns over the charges.

Hundreds of his supporters have been protesting in the capital, Male

The judge at the court in the capital, Male, said the prosecution had proved “beyond reasonable doubt” that Mr Nasheed ordered the “arrest or forceful abduction and detention” of Judge Abdulla Mohamed in January 2012.

Mr Mohamed was detained after ordering the release of an opposition politician, provoking weeks of protests.

Mr Nasheed eventually stepped down on 7 February, later saying he had been forced to resign at gunpoint. His allies say he was ousted in a coup.

After the sentencing, Mr Nasheed urged his supporters to come out on to the streets to “confront the dictatorial power of this regime,” according to a statement released by his office.

The current president, Abdullah Yameen, has recently become alienated from key former colleagues. He arrested his defence minister, accusing him of plotting a coup, and also sacked the chief justice and another judge.

He was elected in November 2013 in a poll that saw its second-round runoff cancelled when early results put Mr Nasheed ahead.

The jail term will effectively prevent Mr Nasheed running for president at the 2018 elections but President Yameen, who is a half brother of Mr Gayoom, has denied the trial was politically motivated.