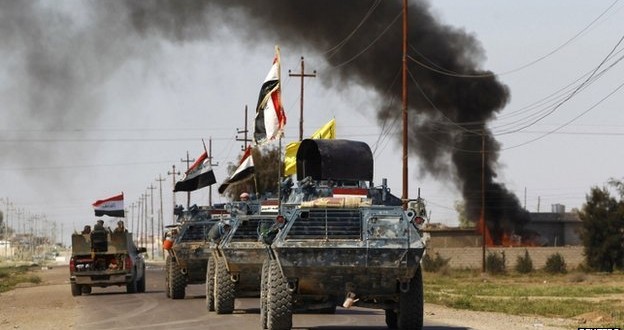 Iraq ‘could take Tikrit in a week’

Iraqi forces hope to retake the city of Tikrit from Islamic State (IS) within a week, a commander has told the BBC.

The head of one of the Shia militia brigades fighting alongside government forces said that IS militants still held about 70% of Tikrit’s town centre.

But he said Tikrit would be “liberated” even if it required street-to-street fighting.

Soldiers and militiamen have reportedly retaken key sites including a police headquarters and a hospital.

The BBC’s Jonathan Beale in Tikrit says the sound of artillery and small arms fire can be heard only a few kilometres from the city centre.

Muain al-Khmdy, a commander of the Iranian-backed Badr Brigade, told the BBC that pro-government forces would surround IS-held areas of the city and then attack, aiming to drive IS fighters from their positions.

Several hundred militants are believed to be holding out in Tikrit, our correspondent says.

The pro-government force ranged against them includes about 3,000 Iraqi troops with 20,000 Shia militiamen and a much smaller force of Sunni tribesmen.

Earlier, Iraqi Defence Minister Khaled al-Obedi told the BBC that recapturing Tikrit could be a turning point in the battle against IS.

IS is defending Tikrit with roadside bombs, booby-traps and suicide attacks

He described the city as a stepping stone to other IS-held territory, including Mosul – the country’s second largest city.

“The liberation of this city [Tikrit] and province will serve as a launch pad for reclaiming the north and the west of Iraq,” he said.

The BBC’s Ahmed Maher in Tikrit says Iraqi troops are being held back from the centre by roadside bombs and booby-trapped cars.

Tikrit was the hometown of ousted former leader Saddam Hussein.

Anti-government Sunnis loyal to Saddam’s Baath party collaborated with the militants when they overran a huge swathe of Iraq, including Tikrit, last June.

The large role of Iranian-backed Shia fighters in the battle for Tikrit has raised fears of reprisals against the mainly Sunni population.

US officials are said to be concerned at reports that Shia militias have been setting fire to buildings as they advance.

Are you in Iraq? Have you been affected by the recent violence? You can share your experiences by emailing [email protected]. If you are available to talk to a BBC journalist please include a contact telephone number.