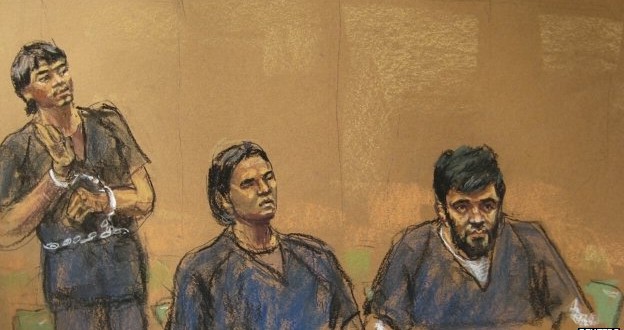 Three New York foreign residents have pleaded not guilty to charges that they attempted to provide support for Islamic State (IS) militants.

Abdurasul Juraboev, 24, and Abror Habibov, 30, both from Uzbekistan; and Akhror Saidakhmetov, 19, of Kazakhstan, were arrested last month by the FBI.

This came after Mr Saidakhmetov allegedly tried to travel to Syria via Turkey to join IS.

One suspect had pledged to kill US President Barack Obama, the FBI said.

The men came to the authorities’ attention after they posted to Uzbek-language websites in recent months.

One by one, they told the presiding judge they were not guilty of the charges against them.

Mr Saidakhmetov was arrested at John F Kennedy International Airport in New York, as he tried to board a flight to Istanbul, Turkey, federal prosecutors said.

But the lawyer added that Mr Saidakhmetov thought he did nothing wrong.

The prosecutors also said that Mr Juraboev bought a plane ticket to travel from New York to Istanbul in March.

The third suspect, Mr Habibov, is accused of helping to fund Mr Saidakhmetov’s efforts to join the Syrian jihadists.

Later on Friday, the judge set their next court hearing for 19 June. If convicted, each defendant faces a maximum sentence of 15 years in prison.

The US has charged about 20 people with planning to join militant groups overseas, many intending to go to Syria to fight for IS.

Figures suggest more than 20,000 foreigners have joined the conflicts in Iraq and Syria in the last three years.