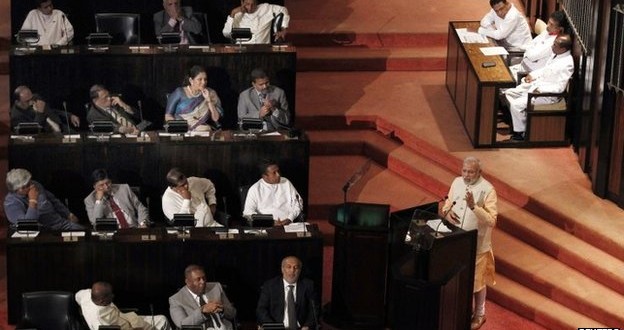 Narendra Modi has urged Sri Lanka and India to act like good neighbours, during the first official visit to Colombo by an Indian PM for 28 years.

He promised that his neighbours would benefit from India’s status as “the new frontier of economic opportunity”.

Analysts say Mr Modi is attempting to counter the increasing influence of China on its island neighbour.

India’s failed effort to broker a peace deal in Sri Lanka’s civil war in the 1980s helped to sour relations.

Former President Mahinda Rajapaksa, who was voted out of office in January, openly hailed his close relationship with Beijing.

However, the new government of Maithripala Sirisena has announced a review of all major deals with China amid claims of corruption.

The Tamil city of Jaffna was already gearing up for Mr Modi’s visit, flying Indian flags from public buildings

Mr Sirisena made his first overseas trip as president to India last month, apparently indicating a willingness to revive the relationship.

Mr Modi, in a speech to Sri Lanka’s parliament, said the future of any country was influenced by the state of its neighbours.

“The future I dream for India is also a future that I want for our neighbours,” he said.

“The world sees India as the new frontier of economic opportunity, but our neighbours should have the first claim on India.”

He said Tamils should be able to live “a life of equality, justice, peace and dignity in a united Sri Lanka”.

On Saturday, the Indian leader will travel to Jaffna, a Tamil-dominated city that was ravaged during the 1983-2009 civil war.

Rajiv Gandhi was the last Indian prime minister to visit the island, when Tamil separatist rebels were escalating their fight into a full-scale conflict.

He sent peacekeepers and framed a peace plan that failed to end the fighting and led to accusations that India was meddling in Sri Lanka’s affairs.

Mr Gandhi was hit with a rifle butt by a Sri Lanka sailor during his 1987 visit. Four years later, he was assassinated by a Tamil Tiger suicide attacker in southern India.