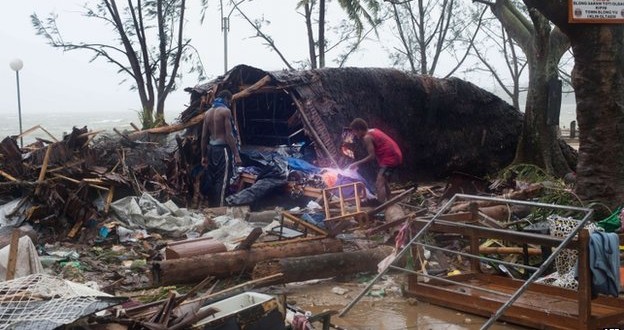 Cyclone Pam has slammed into the south Pacific archipelago of Vanuatu leaving “complete devastation” in its wake, aid agencies say.

Houses in the capital, Port Vila, were destroyed and “people are wandering the streets looking for help”, said Tom Skirrow of Save the Children.

He said eight people were confirmed dead, but UN agencies say dozens may have been killed.

Vanuatu’s president said he had a “heavy heart” and appealed for aid.

Chloe Morrison, an emergency communications officer with World Vision who is in Port Vila, said on Saturday that streets were littered with roofing, uprooted trees and toppled power lines.

Phil Mercer reports on Cyclone Pam which has ravaged the pacific nation of Vanuatu. Video courtesy of YouTube/Isso Nihmei at 350.org

She said there were reports of entire villages in remote areas being destroyed.

“It’s still really quite dangerous outside. Most people are still hunkering down,” she said.

“The damage is quite extensive in Port Vila but there are so many more vulnerable islands. I can’t even imagine what it’s like in those vulnerable communities.”

Mr Skirrow said: “The scene here this morning is complete devastation – houses are destroyed, trees are down, roads are blocked and people are wandering the streets looking for help.

“Communications are down across much of the country with the total extent of the devastation unlikely to be known for several days.”

Unicef spokeswoman Alice Clements described the cyclone as “15-30 minutes of absolute terror” as it passed over Port Vila.

“I saw the sliding doors from my three-storey-hotel room completely blow away – it was terrifying,” she said.

Debris was strewn across the streets in the capital, Port Vila

Many trees were felled, and houses had their roofs torn off

Unicef in New Zealand warned that Cyclone Pam could be one of the worst ever weather disasters for the region.

“While it is too early to say for certain, early reports are indicating that this weather disaster could potentially be one of the worst in Pacific history,” New Zealand executive director Vivien Maidaborn said in a statement.

Vanuatu’s President Baldwin Londsdale was attending the World Conference on Disaster Risk and Reduction in Japan, where he appealed for international support.

“I am speaking with you today with a heart that is so heavy,” he said.

“I stand to appeal on behalf of the government and people of Vanuatu to the global community to give a lending hand.”

Unconfirmed reports said that 44 people had died in Penama province in the north-east of Vanuatu, the UN’s Office for the Co-ordination for Humanitarian Assistance (UNOCHA) said earlier in a statement.

Boats moored in Port Vila bore the brunt of the storm

Australian Foreign Minister Julie Bishop said the country was preparing to send a crisis response team to Vanuatu if needed.

“There are destructive winds, rain, flooding, landslides, sea surges and very rough seas and the storm is exceedingly destructive there,” she said. “We are still assessing the situation, but we stand ready to assist.”

Although thousands of people spent the night in emergency shelters, many more were forced to ride out the storm in their own homes.

All six provinces of Vanuatu have been under red alert, meaning people are advised to immediately seek shelter.

Pam, a category five tropical storm, had already caused major damage on other Pacific islands, including Kiribati and the Solomon Islands.