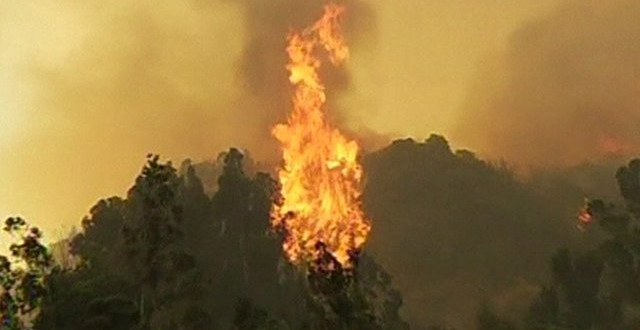 More than 4,000 people have been evacuated

Chilean authorities have declared a state of emergency as a raging forest fire forced thousands of people to flee their homes.

The fire is threatening the port cities of Valparaiso and Vina del Mar.

The interior ministry said about 4,500 people had already been evacuated and another 10,000 might need to be moved.

Valparaiso is still recovering from a forest fire last April that killed 15 people, injured more than 500 and destroyed nearly 3,000 homes.

The fire began at an illegal garbage dump on Friday afternoon, officials said, and spread quickly fanned by strong winds.

By late Friday, Chile’s Emergency Office estimated that about 300 hectares (740 acres) had been affected.

Emergency crews battled through the night to keep the flames from reaching residential districts in Valparaiso.

Three firefighters have been injured so far and a 67-year-old woman died of cardio-respiratory causes, the interior ministry said.

Valparaiso’s poorest areas, often made up of little more than wooden huts, were worst hit by last year’s devastating fire.

Entire neighbourhoods were razed and many of those who died were found in the burned-down homes they had refused to leave.

The fires are threatening the outskirts of Valparaiso

Have you been affected by the forest fire? If it is safe to do so, you can email [email protected] with your experience. Please include a telephone number if you are willing to be contacted by a BBC journalist.