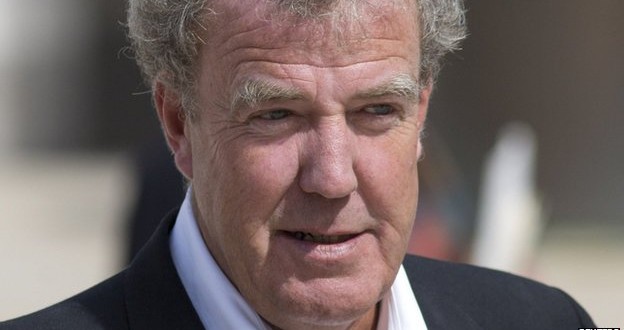 Clarkson was suspended after a “fracas” with a BBC producer

Top Gear host Jeremy Clarkson initiated the BBC investigation which prompted his suspension, after he informed BBC bosses of the alleged “fracas”.

Producer Oisin Tymon, with whom the altercation took place, is not believed to have filed his own complaint.

Interviews are expected to be held with the star and other parties next week, and the show has been taken off-air.

Clarkson has expressed regret over the incident, which his co-presenter James May labelled “a bit of a dust-up”.

Jeremy Clarkson: “I am very grateful to everybody”

An online petition calling for the star’s reinstatement – set up by political blogger Guido Fawkes – has accrued more than 800,000 signatures since Tuesday.

Speaking to reporters on Friday, Clarkson said he is “very grateful to everybody” who has signed the petition.

Top Gear is one of the BBC’s most popular and profitable TV shows, with an estimated global audience of 350 million.

Its success is largely attributed to the contentious host, who has appeared on the show since 1988.

Top Gear is presented by James May, Richard Hammond and Jeremy Clarkson

Politicians on all sides have weighed into the affair, with Prime Minister David Cameron – a friend of Clarkson – saying he hoped the incident could be “sorted out”.

“It’s a great programme and he’s a great talent,” he said.

A lawyer for Mr Tymon said his client “intends to await the outcome of the BBC investigation and will make no comment until that investigation is complete”.

Clarkson’s approach to BBC bosses suggests he was trying to pre-empt any official complaint. The incident, at a Yorkshire hotel, is reported to have been witnessed by members of the public, as well as some of the production team.

The presenter, 54, was given what he called his “final warning” last May after claims he used a racist word during filming.

He later apologised for the incident which, although never broadcast, had been leaked to a tabloid newspaper.

A further incident during shooting in Argentina saw the show’s executive producer, Andy Wilman, brand 2014 an “annus horribilis” for his team.

Clarkson, and co-presenters May and Richard Hammond, are due to renegotiate their contracts next month.