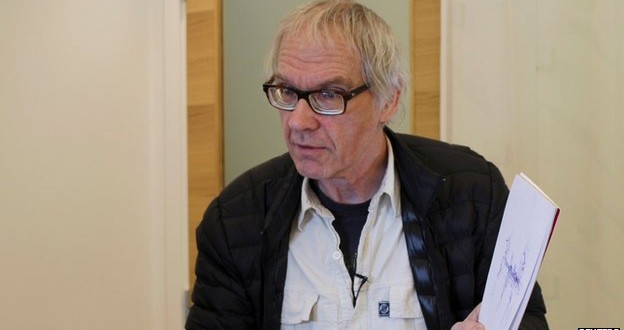 Lars Vilks has been living under police protection in Sweden

A Swedish cartoonist who depicted the Prophet Muhammad as a dog has made his first public appearance since attending a debate that was targeted in a gun attack in Copenhagen last month.

Lars Vilks received a prize for courage from a free press group, at a heavily secured event in the Danish parliament.

His cartoon offended many Muslims and he now lives under guard in Sweden.

A radicalised gunman with gang links attacked the Copenhagen debate and a synagogue, killing two people.

He had recently been released from prison but is not thought to have been part of a terror cell.

The attacks prompted a massive security operation in Copenhagen

Mr Vilks, who has been associated with the Swedish left, received the Sappho award from the right-wing Danish Free Press Society.

The armed security around the event – as well as its location in parliament – shows how much Denmark has changed since the February attack, says the BBC’s Malcolm Brabant in Copenhagen.

Our correspondent says the show of force is something of a culture shock for what has been a peaceful and relatively secure country.

The Vilks cartoon was published in 2007, a year after a series of depictions of the Prophet Muhammad in Denmark’s Jyllands-Posten paper prompted protests by Muslims around the world.

Muslims regard visual representation of the Prophet as blasphemous.