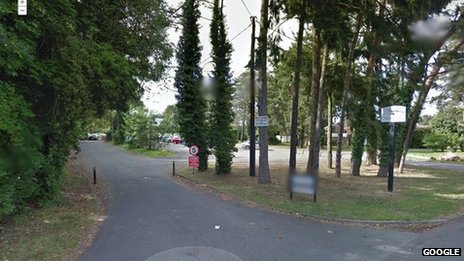 The burning car was found in Rusper Road, near Ifield Golf Club

A body has been found inside a car on fire in a field in West Sussex.

Firefighters found the body in the boot of the Volkswagen Jetta, which was parked near Ifield Golf Club in Rusper Road, Ifield, on Friday afternoon.

Sussex Police said they were trying to identify the person and to determine the gender. The vehicle suffered extensive fire damage.

A 34-year-old woman from Dulwich, south-east London, has been arrested on suspicion of conspiracy to murder.

A post-mortem examination to determine the cause of death is due to take place later.

Firefighters were called to the scene shortly after 14:00 GMT.

Det Ch Insp Jason Taylor said officers were treating it as a murder investigation and were following several lines of inquiry.

He asked for anyone with any information about the car or who saw it being abandoned and set on fire to contact police.