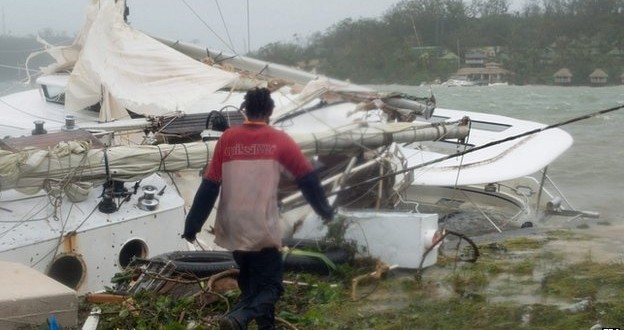 The extent of the destruction may not be known for days, relief agencies say

Aid agencies are stepping up efforts to reach remote communities hit by Cyclone Pam which tore through the Pacific archipelago of Vanuatu.

At least eight people are reported to have died and it is feared the toll could rise as news comes in from outlying islands.

Thousands of people spent a second night in shelters after their homes were damaged or destroyed.

Oxfam Australia said entire communities had been “blown away”.

The category five storm, with winds of up to 270km/h (170mph), veered off its expected course and struck populated areas on Friday night.

Chloe Morrison, an emergency communications officer with World Vision in Port Vila, said residents had woken to much calmer weather on Sunday.

She said communications were still down in many areas and her group had unable to account for many of its 76 staff members on the islands.

She said it would have been a “very, very tough time” for anyone not in a secure shelter during the cyclone.

Port Vila bore the brunt of the storm

“I am speaking to you today with a heart that is so heavy,” he said at the UN’s World Conference on Disaster Risk and Reduction in Japan.

The extent of the devastation is unlikely to be known for several days, said Tom Skirrow, Save the Children’s Vanuatu country director.