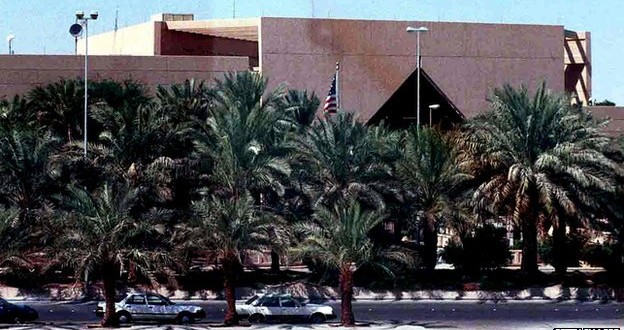 US issues alert for Riyadh embassy

The US embassy in the Saudi capital Riyadh has cancelled all consular services for Sunday and Monday due to “heightened security concerns”.

In a statement, the embassy said consular services in Riyadh, Jeddah and Dhahran would not be available.

It urged US citizens to take extra precautions when travelling in Saudi Arabia and to keep a low profile.

On Friday, the embassy warned that Western oil workers could be the target of militant attacks.

It said it had information that “individuals associated with a terrorist organisation” could be targeting people working in the oil-rich Eastern Province.

The message did not identify the militants.

Saturday’s statement did not give details of any specific threat but said: “All US citizens are encouraged to be aware of their surroundings and take extra precautions when travelling throughout the country.

“The Department of State urges US citizens to carefully consider the risks of travelling to Saudi Arabia and limit non-essential travel within the country.”

The last security incident in Saudi Arabia involving US citizens happened last October when a disgruntled Saudi-American, dismissed from his job at a US defence contractor in Riyadh, shot two US co-workers, killing one and wounding the other.