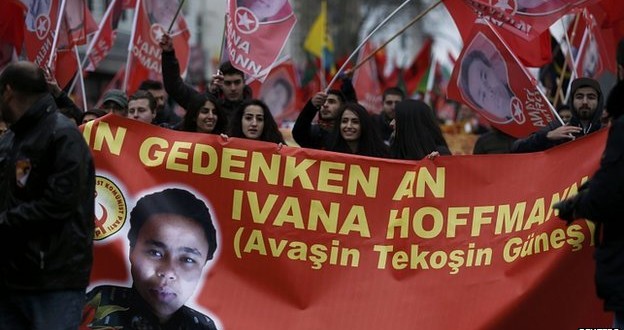 Funeral for German who fought IS

About 2,000 people have attended the funeral march for a German woman who died fighting Islamic State (IS) militants in Syria.

Waving flags and banners, they escorted the body of Ivana Hoffmann, 19, through the city of Duisburg to the cemetery where she was buried.

Ms Hoffman was killed earlier this month in the battle for Tal Tamr, in north-western Syria.

She had been fighting alongside the Kurdish Popular Protection Units (YPG).

Ms Hoffman was the first Western female fighter known to have been killed fighting IS.

She was a member of Turkey’s Marxist-Leninist Communist Party (MLKP) and joined the YPG fighters six months ago.

A MLKP statement, which referred to her by her nom de guerre Avasin Tekosin Gunes, declared her to be “immortal”.

UK-based activist group the Syrian Observatory for Human Rights said last week that at least 40 Kurdish fighters and IS militants had been killed in the battle for Tal Tamr.

About 100 Western volunteers are believed to be fighting IS alongside Kurdish forces in northern Syria and neighbouring Iraq.