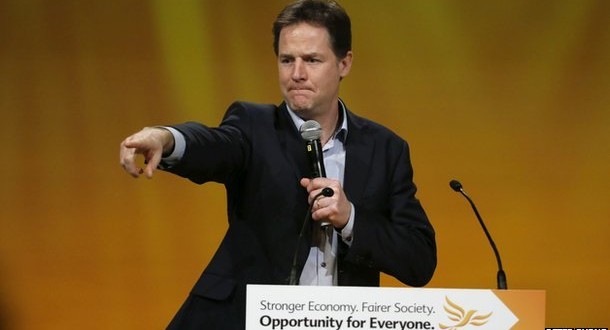 The Liberal Democrats are “here to stay”, and will defy poor poll predictions in the general election, party leader Nick Clegg is to say.

In his keynote speech at the party’s spring conference in Liverpool, Mr Clegg will insist the Lib Dems will do “better than anyone thinks” on 7 May.

The party “can and will win” in areas where it can mount a strong campaign, the deputy prime minister will say.

He will urge members to be proud of the party’s record in coalition government.

“So when people tell you we can’t, tell them where to go. I have a message for all those who are writing us off once again: the Liberal Democrats are here to stay.”

The BBC’s political correspondent Ross Hawkins said Nick Clegg will aim to bolster the confidence of party activists, and will remind them of the Lib Dem’s single by-election win in Eastleigh during this parliament.

“He and his colleagues reassure themselves that internal polls show the party better placed than the published data,” our correspondent said.

However, former Lib Dem president Tim Farron has said he believes the party could suffer for a generation as a result of the decision to go into coalition with the Conservatives.

“Just think what going into coalition with the Tories will do to our brand over the next generation.”

But in a defiant speech on Sunday, Mr Clegg will insist the party is “still standing”.

“I’ve heard the predictions. I’ve seen the polls. But let me tell you this: we will do so much better than anyone thinks,” he will say.

“In those seats where we are out in force, making our case loudly and proudly, we are the ones making the weather. I’ve seen it for myself in Liberal Democrat seats across the country.

“We are showing that with hard work, strong local campaign teams and a record of delivering for people in national and local government, we can and will win.”

“If you think a vote for UKIP, or the Greens, or the SNP is harmless – it isn’t.”

At the conference in Liverpool on Saturday, Mr Clegg said the final significant decisions of the current coalition government had already been taken, with negotiations over Wednesday’s Budget almost finalised.

He will tell activists that the fact the coalition has lasted the full term of the parliament meant the Lib Dems had “changed the political landscape forever”.

“We broke the stranglehold of the two old parties and proved that coalition can be strong, stable and successful,” he will say.