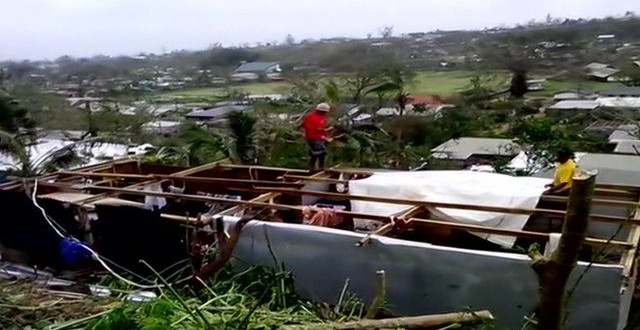 Devastated Vanuatu starts to get aid

The President of Vanuatu, Baldwin Lonsdale, described Cyclone Pam as “a monster”

Aid is beginning to arrive in Vanuatu after the Pacific island nation was hit by a cyclone which President Baldwin Lonsdale described as a “monster”.

Air force planes arrived with supplies from Australia and New Zealand, and other countries have pledged to help.

A communications blackout means little is known about conditions beyond the capital but a pilot saw similar devastation in outlying islands.

His voice breaking, President Lonsdale told the BBC that Cyclone Pam had destroyed most buildings in the capital Port Vila, including schools and clinics.

A state of emergency has been declared in the tiny state of 267,000 people, spread over 65 islands.

At least eight people are confirmed to have been killed.

However, it is feared the toll will rise sharply as rescuers reach outlying islands in the impoverished country.

The category five storm, with winds of up to 300km/h (185mph), veered off its expected course and struck populated areas when it reached Vanuatu early on Saturday local time (+11 GMT).

It is now moving towards New Zealand, and though it has weakened severe weather warnings have been issued for parts of the country.

Port Vila’s airport was damaged in the cyclone and is closed to commercial flights but the first planes carrying aid supplies were able to land on Sunday, Paolo Malatu, co-ordinator for the National Disaster Management Office, told AP news agency.

He said officials were planning to fly out to outlying islands on Monday to assess the damage.

“The wind was [so] strong that the shutters of the window broke off and… the glass windows smashed on the floor,” allowing the rain to pour in, a Port Vila resident identified as Jayleen told AP.

The family shop was completely destroyed.

President Lonsdale was on Sunday said to be trying to return home from a disaster risk conference he had been attending in Japan when the cyclone hit.

At the conference, Vanuatu Red Cross President Hannington Alatoa told reporters that one pilot who had flown over the Vanuatu islands of Tanna and Erromango had described devastation on a similar scale to that around Port Vila.

Everything had been “flattened”, he quoted the pilot as saying.

There were “15-30 minutes of absolute terror” as the cyclone tore into the island, said Alice Clements, a spokesperson for UN children’s agency Unicef.

Cyclone Pam has been compared with Typhoon Haiyan in strength, as Phil Mercer reports

A UN disaster assessment team is due to arrive in Vanuatu in the coming hours.

“It’s devastation out there,” said Carina Smith, a British doctor on holiday in Vanuatu at the time the cyclone struck.

“Buildings, trees, power lines are down. Water isn’t running clean from taps any more so there’s a concern about contamination,” she told the BBC.

“I’ve been up at the hospital [on Sunday and Saturday] and there’s severe damage to the hospital, which is the capital city hospital and a referral hospital for all the archipelago of islands – it’s lost most of its roof and it’s flooded.”

President Lonsdale earlier made an impassioned plea for international help.

Many houses not built with concrete have been flattened

“I am speaking to you today with a heart that is so heavy,” he said.