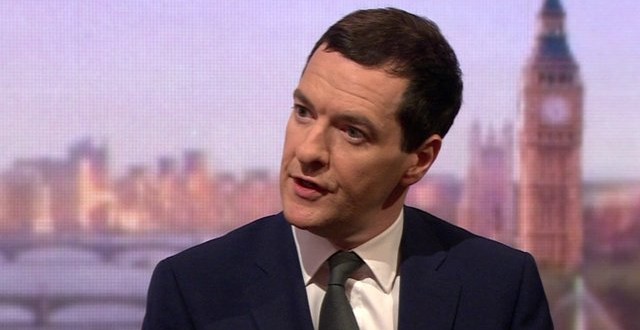 George Osborne: “We’re trusting people who have worked hard and saved hard all their lives”

Chancellor George Osborne has promised “no giveaways, no gimmicks” in this week’s Budget – but is expected to further relax pension rules.

He is set to allow up to five million existing pensioners to swap their fixed annual payments for cash.

Mr Osborne told the BBC his last Budget before the election would be one for a “truly national recovery”.

Labour’s Ed Balls said the Tories were committed to an “ideological plan” for the biggest cuts since World War Two.

The chancellor and shadow chancellor both appeared on the BBC’s Andrew Marr Show days before the Budget, the last one before all the parties go to the polls on 7 May.

In what is seen as an attempt to woo older voters, the chancellor is expected to extend pension changes from April 2016, to allow existing pensioners to swap their annuity for a fixed lump sum.

It follows reforms announced last year that allow working people to cash in all or part of their defined contribution pension when they retire, rather than buy an annuity that guarantees an income for life.

Pensioners had been required to buy annuities under the old rules.

Mr Osborne told the programme it was about “trusting those people who have worked hard and saved all their lives” and said it was “patronising ” to suggest people might blow the money on an expensive sports car then come back for more when they ran out of cash.

There has been speculation that falling oil prices might give the chancellor a pre-election war chest by boosting spending and lowering inflation.

The chancellor said he would not comment on economic forecasts, but added: “This Budget is all about securing a truly national recovery from building a Northern powerhouse, connecting up other regions of our country, committing to long-term plans that support science and high-speed transport… so no giveaways, no gimmicks a Budget for the long term.”

Asked if that meant no “giveaways” by raising national insurance and income tax thresholds he said: “Everything we do in this Budget has to be paid for.”

The pension reforms that the chancellor announced last year were the rabbit in the 2014 Budget box.

There are those who argue this freedom will tempt some pensioners to make short-term spending choices, leaving themselves short of an income in later life. But Mr Osborne’s view is that those who’ve worked hard and saved should be able to make their own decisions.

BBC business correspondent Joe Lynam said the changes would only apply to retired people who had money purchase pension schemes.

The former government adviser and pensions expert Ros Altman welcomed the proposals but warned that a proper market for annuities was needed so that pensioners were not overcharged a second time, our correspondent added.

Mr Osborne is expected to announce on Wednesday:

But shadow chancellor Ed Balls told the BBC Mr Osborne wanted to go beyond “balancing the books” in the next Parliament.

Mr Osborne was committed to an “ideological plan” and wanted to run a £23bn surplus in order to “cut the size of the state” to a level not seen since the 1930s, Mr Balls said.

Neither Mr Osborne nor Mr Balls would commit categorically to sticking to Nato’s target that 2% of national income should be spent on defence in future.

The TUC’s general secretary Frances O’Grady has said there is a danger the Budget will be “more about winning votes in six weeks than securing growth for six years”.

In its pre-Budget statement, the TUC – which represents about six million workers – said the UK “urgently needs to change course” to avoid long-term economic stagnation and urged the government to borrow more and boost public investment.

Are you retired or soon to retire? What will these changes mean for you? You can share your experiences by emailing [email protected]. If you are available to talk further to a BBC journalist please include a telephone number.